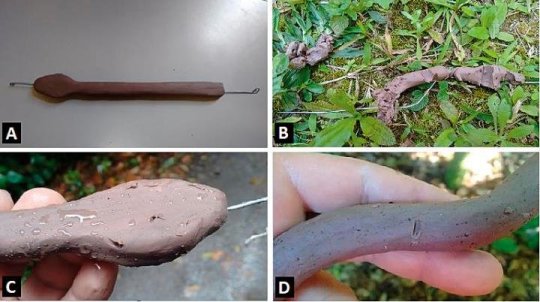 In São Paulo, Brazil’s largest city, it is easier to find “giant” jararaca pit vipers (Bothrops jararaca) in a small fragment of Atlantic Rainforest surrounded by urban sprawl than in a nature reserve that is 16 times larger, even though more food is available for snakes in the latter.

A new study suggests that the difference may be due to the number of predators in each habitat and not to the availability of food, as the researchers supposed at the outset.

Their findings have been published in the Journal of Herpetology, in an article originating with the master’s research conducted by Lucas Henrique Carvalho Siqueira at São Paulo State University’s Institute of Biosciences, Letters and Exact Sciences (IBILCE-UNESP) in São José do Rio Preto. The study was supported by a scholarship from the São Paulo Research Foundation (FAPESP) and supervised by Otavio Augusto Vuolo Marques, a researcher affiliated with Butantan Institute’s Ecology and Evolution Laboratory.

Parque da Cantareira is an Atlantic Rainforest reserve in the north of the same city with similar climate and vegetation but is not a small isolated forest patch like Parque do Estado, which is one-sixteenth of its size.

The jararacas in question are called “giant” because they are much larger than average for the species. Gigantism was not detected in these populations, but the study did conclude that the abundance of large specimens, with a length of approximately 1.5 m, in Parque do Estado was significant.

The size of the jararacas collected in the park caught Marques’s attention. “We received many jararacas at Butantan Institute, and some were of above-average size. When we checked their origin, we found they were from Parque do Estado,” he said.

Previous studies have shown that large snakes are typically found on islands. According to Marques, isolated populations provide good examples of morphological divergence.

“Parque do Estado isn’t connected to other forest areas. It’s like an island, but instead of being surrounded by water, it’s isolated by urban sprawl,” he said. The park is a 540 hectare conservation area containing an Atlantic Rainforest remnant.

“We decided to see whether these snakes were really growing to larger sizes than other populations and to analyze certain variables that might explain any such size difference, especially food supply and the presence of predators,” Marques said.

To investigate the phenomenon, Siqueira used morphological data on jararacas from published research and snakes preserved in Butantan Institute’s collection that had come from the two sites. He also went into the field to collect primary data.

“We placed traps to analyze the availability of food in the two areas. Adult jararacas feed on small rodents,” he said.

The authors of the study set out to test two hypotheses. The first was that jararacas were larger in Parque do Estado because the food supply was more abundant. Studies conducted by researchers from Butantan Institute on Alcatrazes, an island off the north coast of São Paulo State, showed that jararacas living on the mainland and feeding on rodents were larger than snakes of the same species living on the island, which has no rodents.

Jararacas living on Alcatrazes feed on frogs, lizards and centipedes, none of which supply many calories. These snakes display dwarfism, as they are at most 0.5 m in length.

“In that case, we concluded that small size correlated with a low-calorie diet, so in the São Paulo study, we naturally hypothesized that the food supply might be particularly abundant,” Marques said. “It made sense to think of urban rats, as Parque do Estado is part of an altered urban area.”

No difference was found between the two populations of jararacas in terms of average size, according to Siqueira. “However, we observed a larger proportion of giant females in Parque do Estado than in Parque da Cantareira,” he said. The females reached larger sizes than the males.

Traps were set to capture prey. “We were also surprised by the amount of food available, which wasn’t larger than in Parque da Cantareira. We captured fewer rodents in Parque do Estado and failed to confirm the presence of urban rats, detecting only wild rats during the study period,” said the FAPESP-supported researcher.

In response to the unexpected finding that the presence of “giant” jararacas was more frequent in Parque do Estado than Parque da Cantareira was not explained by a more abundant food supply, the researchers next tested the second hypothesis, relating to the presence of predators. “In Parque do Estado, we recorded fewer than half the number of attacks compared with Parque da Cantareira,” Siqueira said.

This part of the study posed another challenge: how to observe and create an indicator of predator attacks. The researchers surmounted this difficulty by using replicas made from modeling clay like the material used in children’s play. With this strategy, Siqueira was able to identify predators and measure the frequency of their attacks on the snakes in both parks.

“We made 1,440 replicas of adult jararacas using a color similar to the snake’s and avoiding spots or stripes so as not to bias the results,” he said.

In each park, they used 720 replicas (60 per month), leaving them in place for two days. The predators left marks of their attacks on the modeling clay.

“Determining the absolute number of predators that feed on jararacas would have required a camera on each of the replicas, which wasn’t feasible, but we succeeded in quantifying the frequency of attacks and identifying whether the predator was a bird or a mammal,” Siqueira said.

The researchers then asked themselves why a smaller number of predators was associated with larger snake size. According to Marques, snakes grow throughout their lives, although growth rates are very slow in older individuals.

“To grow a great deal, they have to live for a long time. There are fewer attacks by predators in Parque do Estado than Parque da Cantareira, so we had a plausible explanation for the higher frequency of giant jararacas there. Attenuated predation allowed them to grow,” Marques said.

The study, he added, is one more contribution to the effort to protect forest fragments such as Parque do Estado. “Studies like this enrich our understanding of the dynamics of these forest fragments and can help plan management actions to ensure their conservation,” said the FAPESP-research supervisor.

To follow his master’s research, Siqueira is now doing doctoral research on methods to estimate the age of pit vipers and rattlesnakes. The usual procedure is to cut their bones to count the growth rings, which resemble those found in tree trunks.

“We have a senile population of jararacas and need to know their ages and find out more about their growth rates,” he said.