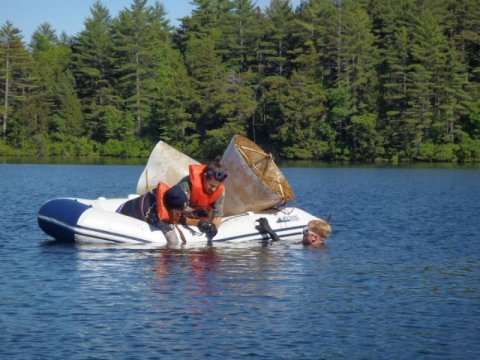 Deploying a new technique for the first time in the region, geoscientists at the University of Massachusetts Amherst have reconstructed the longest and highest-resolution climate record for the Northeastern United States, which reveals previously undetected past temperature cycles and extends the record 900 years into the past, well beyond the previous early date of 1850.

First author Daniel Miller, with Helen Habicht and Benjamin Keisling, conducted this study as part of their doctoral programs with advisors geosciences professors Raymond Bradley and Isla Castañeda. As Miller explains, they used a relatively new quantitative method based on the presence of chemical compounds known as branched glycerol dialkyl glycerol tetra ethers (branched GDGTs) found in lakes, soils, rivers and peat bogs around the world. The compounds can provide an independent terrestrial paleo-thermometer that accurately assesses past temperature variability.

Miller says, “This is the first effort using these compounds to reconstruct temperature in the Northeast, and the first one at this resolution.” He and colleagues were able to collect a total of 136 samples spanning the 900-year time span, many more than would be available with more traditional methods and from other locations that typically yield just one sample per 30-100 years.

In their results, Miller says, “We see essentially cooling throughout most of the record until the 1900s, which matches other paleo-records for North America. We see the Medieval Warm Period in the early part and the Little Ice Age in the 1800s.” An unexpected observation was 10, 50-to-60-year temperature cycles not seen before in records from Northeast U.S., he adds, “a new finding and surprising. We’re trying to figure out what causes that. It may be caused by changes in the North Atlantic Oscillation or some other atmospheric patterns. We’ll be looking further into it.”

He adds, “We’re very excited about this. I think it’s a great story of how grad students who come up with a promising idea, if they have enough support from their advisors, can produce a study with really eye-opening results.” Details appear in a recent issue of the European Geophysical Union’s open-access online journal, Climate of the Past.

The authors point out that paleo-temperature reconstructions are essential for distinguishing human-made climate change from natural variability, but historical temperature records are not long enough to capture pre-human-impact variability. Further, using conventional pollen- and land-based sediment samples as climate proxies can reflect confounding parameters rather than temperature, such as precipitation, humidity, evapo-transpiration and vegetation changes.

Therefore, additional quantitative paleo-temperature records are needed to accurately assess past temperature variability in the Northeast United States, the researchers point out. An independent terrestrial paleo-thermometer that relies on measuring two byproducts of processes carried out in branched GDGTs in lake sediment, a method first introduced two decades ago by researchers in The Netherlands, offered a promising alternative, Miller says.

Source organisms are not known for branch GDGTs, he points out, but they are thought to be produced in part by Acidobacteria. “These are compounds likely produced by different algae and bacteria communities in the membrane, or skin,” he notes. “Just like for humans, the skin regulates the organism’s body temperature and these compounds change in response to temperature. So if they grow in summer, they reflect that and the compounds are different than if they were produced in winter. We record the compounds to get the temperature curves. We found there seems to be a huge bloom of these organisms in the fall. After they die, they settle into the lake bottom. We think it’s mainly a fall temperature that we’re detecting.”

For this work, Miller and colleagues constructed large plastic sediment traps and deployed them about ten feet below the surface of a small, 106-foot-deep lake in central Maine in May, 2014. They then dove under to collect a catchment bottle from the bottom of each trap every month in June, July, August and September, and the following May 2015.

Miller says, “This lake is very deep for its small area, with very steep sides. It doesn’t seem to have much mixing of water layers by surface winds. We think that has helped to preserve a bottom water layer with no oxygen year-round, known as anoxia, which helps in the preservation of annual layers in the sediments at the bottom of the lake. It’s rare for a lake to have such fine, thin lines that represent annual deposition, so all you have to do is count the lines to count the years. We double-checked our results with radiocarbon dating and other methods, and it turns out that reconstructing the temperature record this way was successful.”

Miller and colleagues say this project enjoyed notable support from many quarters, including the UMass Amherst Alumni Association supporting student field work and data collection in Maine; the geology department at Bates College; funding from the U.S. Geological Survey; and at UMass Amherst, sophisticated biogeochemistry laboratory equipment and the Joe Hartshorn Memorial Award from the geosciences department, and other assistance from the Northeast Climate Adaptation Science Center.

The researchers conclude that this first paleo-temperature reconstruction coupled with site-specific knowledge from Basin Pond “informs our understanding of climatic variability in the Northeast U.S. beyond the era of human influence” and “contributes to our understanding of the production and fate of brGDGTs” in lake systems.