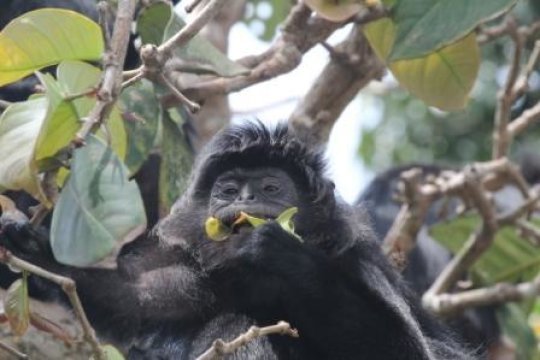 Asian colobine monkeys are unable to taste natural sugars, and in fact have a generally poor sense of taste. This is according to research led by Emiko Nishi of the Primate Research Institute of Kyoto University in Japan. Nishi and her colleagues found that the receptors on the tongues of colobine monkeys do not function in the same way as for fruit-eating monkeys, who are sensitive to sweet tastes. The study is published in the Springer Nature branded journal Primates, which is the official journal of the Japan Monkey Centre.

In general, mammals are able to taste sugary flavours thanks to the sweet taste receptor gene TAS1R2/TAS1R3 and related taste buds on the tongue. In a previous study, the same group of researchers showed that colobine monkeys do not pick up bitter tastes. Nishi and her colleagues conducted a series of laboratory and genetic tests to investigate these protein expressing cells reconstructed from leaf-eating Javan lutung monkeys (Trachypithecus auratus), which are part of the Colobinae subfamily of monkeys. These cells showed no reaction when natural sugars such as sucrose contained in sugarcane, fructose in fruit and maltose in fermented foods. Although the receptor genes are present, they seem not to function.

In a further behavioural test, Nishi and her colleagues watched what happened when silvery lutung (Trachypithecus cristatus) and Hanuman langur (Semnopithecus entellus) in captivity were given the choice between baskets of jellies with or without sugar added to them. The animals ate all of the jellies, without preferring the sweet type over the bland version.

Nishi and her colleagues speculates that the animals’ lack of interest in foods containing natural sugars and the functional decline of TAS1R2/TAS1R3 might be related to their feeding habits. They are primarily leaf eaters and very seldom eat fruits containing many simple sugars. Nishi further explains that the slim bodies of colobines are not geared towards digesting sweet tasting, energy-rich foods. Their peculiar ruminant-like stomach helps them digest cellulose and hemicellulose contained in leaves through a fermentation process involving bacteria.

“The consumption of too many ripe fruits might contribute to rapid overfermentation and the overproduction of volatile fatty acids, leading to an increase in acid levels in animals’ body,” Nishi explains.

Colobine monkeys’ low sensitivity to maltose or malt sugar further suggests that the leaves they eat do not have to be starch-rich. In fact, eating too many carbohydrates and sugars rather than fibre-rich food is known to give these monkeys diarrhea and other digestive problems. Javan lutungs for instance are known to prefer leaves that are easily digestible and fibre-rich to ones that are rich in starches.

“Some mammals with specialized feeding habits and less exposure to specific tastes lose sensitivity to particular tastes, as has happened in panda and members of the cat family,” Nishi says.