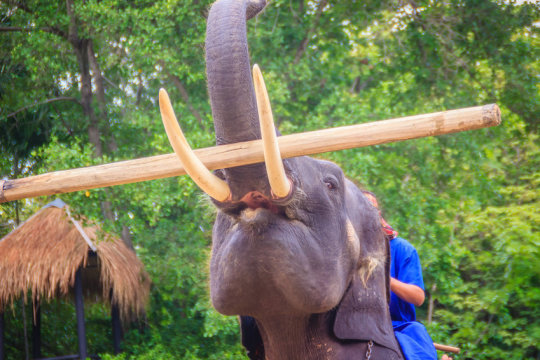 Scientists at the University of Sheffield and University of Turku are looking at ways to boost captive populations of Asian elephants without relying on taking them from the wild.

Almost a third of Asian elephants are in captivity in countries like India, Myanmar and Thailand, mainly being used in the timber industry to drag logs or for tourism.

Sustaining wild populations is the conservation priority but, with so many individuals in captivity, maintaining sustainable captive populations with high welfare standards is also important for the future of the species.

The sustainability of these elephant populations has always relied on the capture of their wild counterparts, but now they are a protected species their future is uncertain.

In a joint research study, the University of Sheffield and the University of Turku, in Finland, working alongside The Myanma Timber Enterprise (MTE), investigated how trends in elephant capture from the wild influenced birth, death and population growth in 3,500 working elephants over 54 years.

Using birth and death rates from years where wild-capture was reduced the scientists assessed the outlook for captive elephants and found that the population is vulnerable to decline.

The research, published in Proceedings of the Royal Society B, suggests that immediate population declines may be reduced if survival in juvenile elephants is improved.

This could involve improving welfare standards during the training period, as the elephants are separated from their mothers and trained for work around the age of four, which can be stressful for them, and identifying pregnant females earlier and improving their welfare so they can provide for and bond with their calf.

John Jackson, PhD researcher from the University of Sheffield’s Department of Animal and Plant Sciences and lead author of the paper, said: “Our model suggests we may see declines in captive elephants for up to 50 years so we must now work to ensure that the captive population is sustainable. With so many Asian elephants in captivity, we must safeguard both captive and wild elephant populations and the people living and working alongside them for the future of the species.

“One hopeful result is that we may see improvements in population growth if we are able to improve the survival of young elephants by just 10 per cent. This shows we can really make a difference by improving welfare for these vulnerable individuals in captivity.”

He added: “Many of us have the opportunity to visit captive elephants used in tourism, particularly in Southeast Asia. We all have our part to play to ensure that the welfare of captive elephants is improved and this may have a positive effect on Asian elephants globally.”

Professor Virpi Lummaa, from the University of Turku, who led the research, said: “The dependence of captive elephant populations on capture from the wild in the past is truly alarming. The problem with elephants is that they take so long to grow and reproduce and have very complex social lives, making them vulnerable to population declines when disturbed.”

The University of Sheffield’s Department of Animal and Plant Sciences is a leading department for whole organism biology, with the UK’s highest concentration of animal and plant researchers.

It is among the top five animal and plant research centres in the country for research excellence, according to the last Research Excellence Framework in 2014.

Animal and plant scientists at Sheffield study in locations from the Polar Regions to the tropics, at scales from within cells up to entire ecosystems. Their research aims both to understand the fundamental processes that drive biological systems and to solve pressing environmental problems.