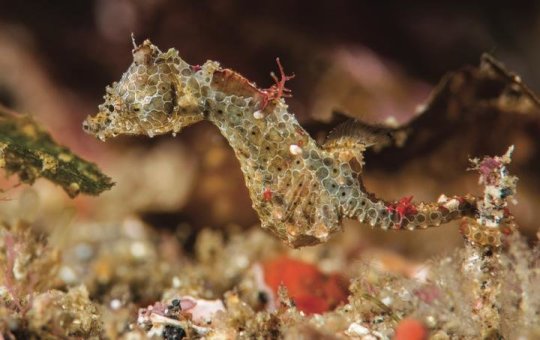 In 2018, researchers at the California Academy of Sciences added 229 new plant and animal species to our family tree, enriching our understanding of Earth’s complex web of life and strengthening our ability to make informed conservation decisions. The new species include 120 wasps, 34 sea slugs, 28 ants, 19 fish, seven flowering plants, seven spiders, four eels, three sharks, two water bears, one frog, one snake, one seahorse, one moss, and one liverwort plant. More than a dozen Academy scientists — along with several dozen international collaborators — described the new species discoveries.

Proving that our vast and dynamic planet still contains unexplored places with never-before-recorded plants and animals, the scientists made their finds over five continents and three oceans — venturing into river-carved canyons, diving to extreme ocean depths, and scouring misty forests. Their results help advance the Academy’s mission to explore, explain, and sustain life on Earth.

“Biodiversity scientists estimate that less than 10 percent of species on Earth have been discovered,” says Dr. Shannon Bennett, Academy Chief of Science. “Academy scientists tirelessly explore near and far, from the familiar forests in our backyards to remote locations as deep as 500 feet beneath the ocean surface. Each species discovery may hold the key to groundbreaking innovations in science, technology, or society and helps us better understand the diversity of life that makes up thriving ecosystems. These new discoveries also highlight the critical role we play as stewards of our one, precious planet.”

Below are highlights from the 229 new species described by the Academy in 2018:

A flowering plant fighting for a foothold

Along the Samana? Norte River in the Colombian Andes, where canyon walls angle so steeply to the water that humans rarely frequent the region, a flowering plant produces sky-blue berries each year. As a rheophyte, this new-to-science species thrives near fast-moving rivers that experience frequent flooding. How the plant is pollinated and its fruit dispersed remains a mystery, but the discoverers suspect the mature berry, which is spongy, might drop into the water, float downriver, and lodge into a new rocky crevice to sprout a new plant. Described this year by emeritus curator of botany Dr. Frank Almeda and his collaborator in Colombia, Miconia rheophytica is already endangered given its small, fragmented range. A proposed hydroelectric dam also threatens to flood the region and fully submerge one of the few localities where this species grows.

A swarm of spider-eating wasps

This year, 120 new wasps are joining — or swarming — the tree of life. Hailing from Australia and New Guinea, these new members of the Pison genus are spider-eating bandits. Females paralyze spiders, stow them in the tiny compartments of their clay nests, and then lay an egg atop each eight-legged prisoner. When the wasp larvae hatch, they dive head-first into a meal beneath — a still-alive, albeit stiff, spider. Emeritus curator of entomology Dr. Wojciech Pulawski has studied wasps since 1953. He spent 16 months studying the Australian Pison in the field and another eight years on their formal description, naming several species after Aboriginal tribes. His thoughts on getting stung? “I hardly feel it,” he says.

A seahorse the size of a jelly bean

The “Japan pig” seahorse may sound large, but don’t be fooled: this diminutive seahorse is no larger than a jelly bean. Cryptic in coloration, the new species blends perfectly into the algae-covered reefs of southeast Japan where it clings tightly via tail to soft corals, feeding on plankton passerby. Hippocampus japapigu is the only seahorse in the world with a bony ridge running down its back. It also sports a pair of wing-like protrusions on its neck, but unlike the half dozen other pygmy seahorses in the world, the Japan pig has just one pair rather than two. “The function of these wing-like structures remains a mystery,” says ichthyology research associate Graham Short. “We wanted to name it the flying pig, but no dice.”

Sea slugs that mimic algae, and each other

Academy curator of invertebrate zoology Dr. Terry Gosliner has discovered 1,000 new sea slugs and counting — over one-third of all species known to science — and this year he formally describes 34 more finds. Four of the new species belong to a group that masquerades as algae known to use toxins for protection. Another 17 new sea slugs, described with Academy invertebrate zoologist Dr. Rebecca Johnson and former Academy volunteer Hannah Epstein, hail from the Indo-Pacific. One of the new species, Hypselodoris iba, comes in two color variations — white and purple — and mimics another locally occurring species. “This is the first time we’ve been able to genetically confirm that color mimicry is widespread in the sea slug world,” says Gosliner. “It’s exciting to see how color patterns evolve among and even within species.”

This year, Academy research associate Dr. Dave “Lost Shark Guy” Ebert brings three new species of deep-dwelling sharks to light, including a dwarf false catshark that swims over 3,000 feet beneath the ocean surface. In 2017, a colleague sent Ebert a photo of an unusual shark that had been caught, but tossed back, on the east coast of Sri Lanka. Ebert set off for the island nation to ask local fishermen if they’d seen a shark similar to the one in his photo. The fishermen told Ebert to return the following day — there on the beach lay a new-to-science dwarf false catshark. “It’s the most memorable discovery of my 35-year career,” says Ebert. The fishermen frequently catch and release the deep-dwelling shark when commercially fishing for gulper sharks. Although of little value at the local fish market, Planonasus indicus is invaluable to science.

A black-and-white banded, long-glanded coralsnake surprised researchers when they spotted it over ten years ago on Dinagat Island in the southeastern Philippines. The new species, formally described this year as Calliophis salitan, has a bright-orange tail unlike its blue-tailed relatives that inhabit the region. The newcomer, which belongs to a group of venomous Asian coralsnakes, is only found in the Philippines. “The evolutionary origins of this new orange-tailed species remain a mystery,” says Dr. Alan Leviton, emeritus curator and Academy Fellow who described the new species with a team that included Academy research associate Dr. Rafe Brown of University of Kansas (who also described a new frog this year). “The species might be more widespread than we think, there might be close relatives we haven’t discovered yet, or it could be the sole surviving member of a lost lineage,” says Leviton. “Or, maybe orange is just the new blue.”

A pair of water bears

Two bear-like creatures are crawling their way onto the tree of life this year. Tardigrades, commonly known as water bears, are microscopic animals that can tolerate extreme environmental conditions — even outer space. In 2015, a cohort of undergraduate students ascended into the oak trees outside Baldwin, Kansas as part of a program that supports students with ambulatory disabilities in their exploration of the canopy. The students collected a new species, and as lead authors, formally described Milnesium burgessi this year. Academy senior scientist Dr. Margaret “Canopy Meg” Lowman mentored the students along with Academy research associate Dr. William Miller of Baker University, who also described a new tardigrade with students from Washington this year.

Nearly 1500 feet beneath the ocean’s surface off Myanmar, a new species of snake eel lurks, burrowing tail-first into the muddy bottom. Here it lives completely submerged, and also shrouded in mystery. “We don’t know much about its life history,” says the Academy’s emeritus chair of aquatic biology Dr. John McCosker who described Ophichthus naga this year. He named the new species after a Buddhist deity — a seagoing, dragon-like serpent — with great powers. “N?ga swims through the Earth as if it was water, a behavior not unlike that of snake eels,” says McCosker. Another snake eel (described by McCosker) and two moray eels (described by Academy research associate Dr. Mark Erdmann of Conservation International) also join the tree of life this year.

Spiders with the fastest spin on Earth

Spiders from the Selenopidae family were recently discovered to have the fastest leg-driven turn of any animal on the planet. This year, three new species join the fast-spinning group, including one from Egypt. Described by Academy post-doctoral researcher Dr. Sarah Crews and her colleague at the University of Tehran, this species was originally collected in the 1800s but only recently recognized as new to science when the team discovered it deep in the collection of the Oxford Museum. Four more spiders from Africa are described this year by emeritus curator Dr. Charles Griswold.

Deep beneath the waters of a remote Brazilian archipelago, a team of deep-diving Academy scientists discovered a fish so dazzling that they didn’t notice a massive sixgill shark hovering above them in an exciting moment captured on camera. “This is one of the most beautiful fishes I’ve ever seen,” says Dr. Luiz Rocha, the Academy’s Curator of Fishes and co-leader of the Hope for Reefs initiative, who along with his co-authors named the dazzling fish after the Greek goddess of beauty, Aphrodite. “It was so enchanting it made us ignore everything around it.” Tosanoides aphrodite joins 18 other new fish species, including another deep-dwelling fish from Easter Island, new gobies and damselfish from the Western Pacific, and several new reef fish from the Eastern Atlantic (described by Academy emeritus curator Dr. Tomio Iwamoto).

This year, 28 new species of ants join the tree of life in their march toward global domination. (Ants rival humans having colonized almost every landmass on Earth.) The new species are only found on the island of Madagascar. Several are part of the carpenter group, which inhabits every possible niche from the forest canopy to twigs and soil to rotten wood. “Carpenter ants live everywhere,” says entomology curator Dr. Brian “Ant Man” Fisher. “We’re beginning to see that other insects, like spiders, mimic them in appearance. This might be for disguise, to help them hunt the ants, or for protection against predators that know carpenter ants to be distasteful.” Fisher has uncovered an impressive tally of over 1,000 new ant finds during his career.