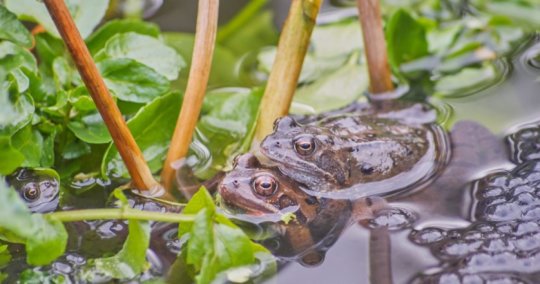 Frogs from groups exposed to a deadly virus are breeding at younger ages, new research suggests.

Scientists studying European common frogs in the UK compared groups (“populations”) exposed to ranavirus and those free from the disease.

While the youngest breeding frogs in disease-free populations are four years old, frogs in virus-exposed groups breed as young as two.

The reasons for this are not yet clear, but the team — led by researchers from the University of Exeter and the Zoological Society of London — warn that this decrease in breeding age means disease-exposed populations are at greater risk of local extinction sparked by environmental changes.

Frogs gather at breeding spots such as ponds and then disperse, but most return to the same ponds year after year.

“Our research shows that the ages of the frogs that return to breed varies between populations which are known to have ranavirus and those which don’t,” said Dr Lewis Campbell, who conducted the research during his PhD at the University of Exeter’s Penryn Campus in Cornwall.

“It’s possible that the more times an older frog returns to the same infected breeding pond, the more likely they are to become diseased and die.

“The absence of older frogs may then create an opportunity for younger — and therefore smaller and less competitive — frogs to successfully breed.

“With high mortality among older frogs, it’s also possible that natural selection pressure has favoured those that are genetically disposed to breed younger.”

Ranavirus, first recorded in the UK in the 1980s, can cause severe skin sores and internal bleeding. It is usually fatal.

In the new study, which incorporated data collected by citizen scientists, breeding frogs in disease-free populations were most commonly six to eight years old, while in populations where ranavirus was present they were mostly three to six years old.

Commenting on the differences between the two kinds of frog population, Dr Campbell, now of the University of Wisconsin-Madison, said: “Our models suggest both infected and uninfected populations can continue to thrive in normal conditions.

“But disease-exposed populations appear to depend heavily on younger breeders that don’t produce as many offspring as older, larger frogs.

“For these populations, an environmental change such as a late frost — that would kill frogspawn and further lower the number of offspring produced — could cause that population to collapse (known as a local extinction).”

He added: “We live in times of increasing environmental change, so understanding how wildlife diseases change the ability of their hosts to cope with such uncertainty is increasingly critical.”

Dr Xavier Harrison, of the Zoological Society of London, said: “We often think of the negative consequences of wildlife disease as being the death of infected individuals in the short term.

“But this study shows that even when a population seems to have survived a disease outbreak and appears otherwise healthy, there are still lingering consequences of that disease months or years afterwards.

“If we really want to understand the full impact of wildlife diseases in nature we need to monitor disease-challenged populations over much longer timescales.”

Ranavirus is believed to be spreading in the UK, and human activity such as movement of animals and soils is thought to be the major cause of this.

Amphibians are the most threatened group of vertebrates globally, and emerging infectious diseases play a large role in their continued population declines.