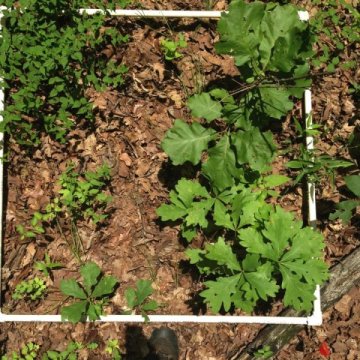 Forests in the eastern United States may have had it easy compared to their western counterparts, with the intense, prolonged droughts and wildfires that have become typical out west in recent years. But as the climate changes over time, eastern forests are also likely to experience longer droughts. And although wildfires are comparatively rare, prescriptive fires are increasingly used in the east. How will these forests fare in the future? A new study from the University of Illinois provides answers.

The research, published in Functional Ecology, focused on the combined effects of fire and drought on white oak seedlings — a drought-tolerant species — in Shawnee National Forest in southern Illinois. The ability of young trees to withstand both stressors could predict the fate of the forests in a changing climate.

“It’s important to ask how fire will affect forests under warmer and drier conditions. Will forests subjected to fire function differently? Will they transition to something that looks more like a savannah or a woodland because fewer young trees establish and survive? In western forests, some tree species are failing to regenerate following fire. Our research provides insights into why that could happen,” says Jennifer Fraterrigo, associate professor in the Department of Natural Resources and Environmental Sciences at U of I, and the study’s co-author.

Lead author Tyler Refsland, a doctoral student in Fraterrigo’s laboratory, compared natural and planted white oak seedlings that were either resprouting from a recent prescribed fire (or simulated fire, in the case of the planted seedlings) or were unscathed. For each set of plants, he either imposed a drought by suspending a clear tarp over the seedlings or allowed natural precipitation to fall to the ground.

Surprisingly, both hypotheses were supported. However, the benefit of removing leaves was temporary, and not strong enough to overcome the tendency of fire to promote adverse environmental conditions associated with drought.

“Fire exacerbated drought-driven declines in the growth of these small trees both by promoting a warmer, drier microclimate,” Refsland says.

By removing some of the low-growing forest plants that may have sheltered the young oaks, fire resulted in higher air temperatures and greater vapor pressure deficits — a measure of how dry the air is and how likely plants are to lose water from leaves. In a changing climate, the researchers suggest the combined effects of drought and recurrent fires could have lasting effects on young trees, even drought-tolerant species. And without a healthy set of juveniles, forest regeneration could be jeopardized.

The researchers note that the results could help land managers predict how different sized trees might respond to drought in fire-managed forests. For example, they identified a size threshold under which the resprouting trees were more likely to suffer the consequences of fire-worsened drought conditions: 0.4 square centimeters in diameter, about a tenth of the size of a postage stamp.

“Foresters have long known about size thresholds for escaping mortality from fire. However, that small, resprouting trees are more vulnerable to drought than large resprouts is an important new finding,” Fraterrigo says. “As such, this research provides valuable guidance to forest scientists and managers who are working to adapt management activities for a future that is likely to be warmer and drier. This kind of information can be used to foster more resilient forests over the long-term.”