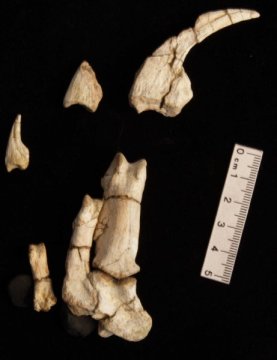 An international research team has announced the discovery of two new dinosaurs in China: Bannykus and Xiyunykus.

Professor Jonah Choiniere from the University of the Witwatersrand, Johannesburg, South Africa was a leading member of the team and is a co-author on the research.

The dinosaurs are both alvarezsaurs, an enigmatic group of theropod (meat-eating) dinosaurs, which have many similarities to birds and which show adaptations thought to be related to eating insects that live in colonies.

“Alvarezsaurs are weird animals,” said Choiniere. “With their strong, clawed hands and weak jaws, they appear to be the dinosaurian analogue to today’s aardvarks and anteaters.”

But alvarezsaurs did not originally eat insects. The earliest members of the group had more typically meat-eating teeth and hands, useful for catching small prey. Only later-evolving members reduced their teeth and evolved a hand with a huge, single claw capable — perhaps — of tearing open rotting logs and anthills.

“The new fossils have long arms, and so show that alvarezsaurs evolved short arms only later in their evolutionary history, in species with small body sizes. This is quite different to what happens in the classic example of tyrannosaurs, which have short arms and giant size,” said co-author Professor Roger Benson of Oxford University.

Bannykus and Xiyunykus are important because they show transitional steps in the process of alvarezsaurs adapting to new diets.

“The fossil record is the best source of information about how anatomical features evolve,” said James Clark, co-author and an Honorary Professor at Wits University. “And like other classic examples of evolution such as the ‘horse series’, these dinosaurs show us how a lineage can make a major shift in its ecology over time.”

“Our international field teams have been tremendously productive over the years,” said Xing. “And this research showcases just some of our incredible discoveries.”

Once the fossils were discovered, their further study was made possible by a joint South Africa/China collaborative grant through South Africa’s National Research Foundation, held by Choiniere and Xu.

“The joint research programme has helped in so many ways,” said Choiniere. “China and South Africa have a great deal of overlap in palaeontology, and it has been a privilege to cross-train students over the last two years.”