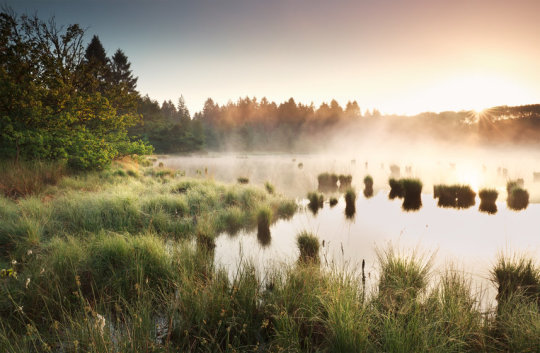 Global fossil fuel emissions would have to be reduced by as much as 20% more than previous estimates to achieve the Paris Agreement targets, because of natural greenhouse gas emissions from wetlands and permafrost, new research has found.

The additional reductions are equivalent to 5-6 years of carbon emissions from human activities at current rates, according to a new paper led by the UK’s Centre for Ecology & Hydrology.

The research, published in the journal Nature Geoscience today (July 9, 2018) uses a novel form of climate model where a specified temperature target is used to calculate the compatible fossil fuel emissions.

The model simulations estimate the natural wetland and permafrost response to climate change, including their greenhouse gas emissions, and the implications for human fossil-fuel emissions.

Natural wetlands are very wet regions where the soils emit methane, which is also a greenhouse gas. The methane emissions are larger in warmer soils, so they will increase in a warmer climate.

The results show the “positive feedback” process are disproportionately more important for the emission reductions needed to achieve the 1.5 °C target rather than the 2 °C target.

This is because the scientists involved in the study modelled the impact of the additional processes for the time-period 2015-2100, which are broadly similar for the two temperature targets.

However, as the emissions budgets to achieve the 1.5 °C target are half of what is required to meet the 2 °C target, the proportional impact of natural wetlands and permafrost thaw is much larger.

“Changes in these emissions will alter the amount of greenhouse gases in the atmosphere and must be considered when estimating the human emissions compatible with the Paris Climate Agreement.”

Co-author Dr Sarah Chadburn, of the University of Leeds, said: “We found that permafrost and methane emissions get more and more important as we consider lower global warming targets.

“These feedbacks could make it much harder to achieve the target, and our results reinforce the urgency in reducing fossil fuel burning.”

Co-author Prof Chris Huntingford, of the Centre for Ecology & Hydrology, said: “We were surprised at how large these permafrost and wetland feedbacks can be for the low warming target of just 1.5°C.”

Materials provided by Centre for Ecology & Hydrology. Note: Content may be edited for style and length.