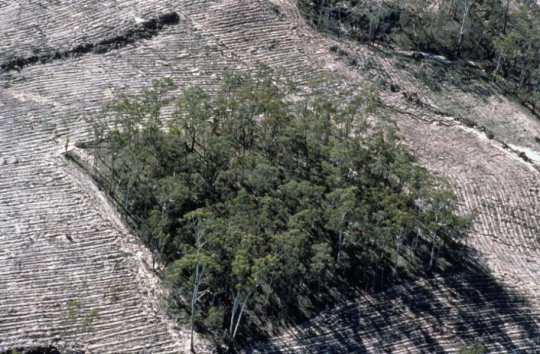 In a study with implications for biodiversity and the spread of infectious diseases, CU Boulder ecologists have demonstrated that deforestation and habitat fragmentation can decrease transmission of a parasitic nematode in a particular species of Australian lizard, the pale-flecked garden sunskink.

The new experimental research, published today in the journal Ecology, found that specimens of the blue and brown-colored, index finger-length skinks who live in isolated forest plots were 75 percent less likely to be infected with parasitic worms than their counterparts living in untouched, continuous forests — an indication that the parasite’s life cycle had been disrupted.

A decrease in parasite prevalence isn’t necessarily good or bad for an ecosystem, the researchers said, but it can result in dramatic changes.

“Parasites are a massive unseen component of an ecosystem and there so many that we don’t see,” said Associate Professor Kendi Davies of CU Boulder’s Department of Ecology and Evolutionary Biology (EBIO). “Parasites regulate populations and influence multiple hosts. It’s largely unknown how these complex interdependencies respond to changes.”

Habitat fragmentation in the form of deforestation remains a major threat worldwide. Scientists estimate that nearly one-third of global forests have disappeared, leaving behind a patchwork of ecological “islands” that can threaten food chains and alter long-standing species interactions

“Fragmentation is a big deal because it leads to loss of biodiversity and ecosystem functions” said Julian Resasco, lead author of the study and a postdoctoral researcher in EBIO. “It can also change the way diseases spread, with the potential to impact human health.”

The new study was conducted at the long-running Wog Wog Habitat Fragmentation Experiment, a 33-year-old continuously-run experiment in the eucalyptus forests of New South Wales, Australia. The site allows researchers to compare uninterrupted forestland to forest fragments that have been isolated by clear-cutting and burning.

Resasco zeroed in on skinks after a chance observation. While examining the gut contents of many historical specimens preserved in a museum, he noticed that the commonly-found lizards had been infected with a particular parasitic nematode. After consulting with Australian colleagues, he learned that it was, in fact, a brand new species.

“I wanted to quantify infections by these nematodes to see if fragmentation had an effect on parasitism,” Resasco said.

The nematodes use a small amphipod crustacean species as an intermediate host, which is in turn eaten by the skink, resulting in infection. But forest fragmentation significantly reduces the moist leaf litter habitat that these amphipods require, depriving the skinks of a meal and the parasites of a transmission pathway.

“We see the consequences of messing with key players in the landscape,” said Resasco.

The next step, the researchers said, is to think in even longer timescales. Now more than thirty years in at Wog Wog, parts of the landscape there have gradually changed from clear-cut to pine plantation forest, which could prompt a rebound.

“Pine forests are a pretty desirable place for the amphipods to live,” said Matthew Bitters, a doctoral researcher in EBIO and a co-author of the study. “So if they do recover, will that mean a rise in skink infections again? Or has something else emerged to disrupt the transmission?”

“Fragmentation research has a long history of studying species interactions such as pollination, seed dispersal and predation,” said Resasco. “Parasitism has received less attention but such research is important for understanding how landscape changes affect biodiversity and disease transmission.”