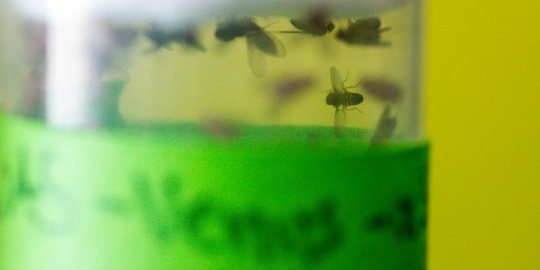 Parkinson’s disease is a neurodegenerative disorder that affects dopamine-producing or dopaminergic neurons. The progressive loss of these neurons is what leads to impairment in movement coordination in those suffering from the illness.

Identifying the genes that underlie the loss of these neurons is important to understanding how the disease functions, according to Patrick Cunningham, a PhD student at Lehigh University in Bethlehem, Pennsylvania, where he is investigating the loss of dopaminergic neurons in Drosophila in a model for Parkinson’s disease.

Cunningham works in the lab of Daniel T. Babcock, an assistant professor in the Department of Biological Sciences whose research focuses on neuroscience. Among the inquiries that Babcock and his team are focused: Why are certain populations of neurons vulnerable to a particular disease?

In trying to answer this question, Babcock and his team focus on why dopamine-producing neurons selectively die in patients with Parkinson’s disease.

The team recently identified the fruit fly protein known as Scarlet as a target gene whose function is required to prevent age-dependent loss of dopaminergic neurons in fruit flies, or Drosophila melanogaster. They found that loss of Scarlet activity causes a progressive loss of dopaminergic neurons, induces locomotor defects, shortens lifespan and functions cell autonomously within dopaminergic neurons. Additionally, they found that this neurodegeneration can be modified by genetically and pharmacologically manipulating levels of metabolites within the kynurenine pathway — a metabolic pathway in cells — and that Scarlet has a neuroprotective role in a model of Parkinson’s disease. These results were recently published and highlighted in The Journal of Cell Science in an article called: “Neurodegeneration and locomotor dysfunction in Drosophila scarlet mutants.”

In an interview for the journal’s “First Person” section, first author Cunningham says: “When I was looking at the rescue experiment to see if Scarlet was neuroprotective in a Parkinson’s disease model I counted the dopaminergic neurons, and, in brain after brain, I saw that they survived.”

He adds: “This was amazing to observe, because the experiment demonstrated that Scarlet was sufficient in preventing dopaminergic neuron loss, suggesting a neuroprotective function. Showing the neuroprotective property of Scarlet really stuck with me because it was my first experience that what we do in lab can be directly applied to a disease.”

First author Cunningham shares credit with his mentor and senior author, Professor Babcock. In the article, they discuss the discovery’s potential to impact future treatment and prevention of Parkinson’s disease.

They write: “Future studies aimed at identifying genes that interact with scarlet, either directly or indirectly, should further aid in understanding why dopaminergic neurons are particularly vulnerable to degeneration. Identifying additional genes that are required to maintain dopaminergic neurons will help further research into therapeutic and preventative treatments for PD patients.”

Materials provided by Lehigh University. Note: Content may be edited for style and length.