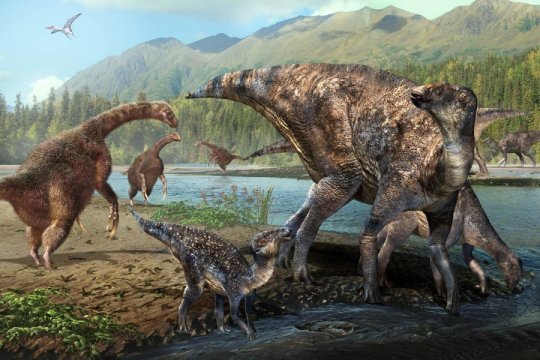 An international team of paleontologists and other geoscientists has discovered the first North American co-occurrence of hadrosaur and therizinosaur tracks in the lower Cantwell Formation within Denali National Park, suggesting that an aspect of the continental ecosystem of central Asia was also present in this part of Alaska during the Late Cretaceous.

This comprehensive cross-disciplinary effort has resulted in a paper — entitled “An unusual association of hadrosaur and therizinosaur tracks within Late Cretaceous rocks of Denali National Park, Alaska” — published in Scientific Reports, an online open access scientific mega journal published by the Nature Publishing Group, covering all areas of the natural sciences.

Fiorillo and a colleague published on a distinct single footprint in Denali National Park in 2012 that they determined to be made by a therizinosaur, an unusual predatory dinosaur thought to have become an herbivore. Therizinosaurs are best known from Asia. Upon his return in 2013 and 2014, they conducted a more detailed analysis of the area, and he and his colleagues unearthed dozens more tracks of therizinosaurs. What surprised Fiorillo and his team most was the co-occurrence of dozens of hadrosaurs, also known as duck-bill dinosaurs.

The plant-eating therizinosaurs are rare and unusual creatures in the fossil record. The strange-looking dinosaurs had long skinny necks, little teeth, a small beak for cropping plants, and big torsos accompanied by large hind feet and long arms with “hands like Freddy Krueger.”

Though therizinosaurs are known from Asia and North America, the best and most diverse fossil record is from Asia — even up to the time of extinction — and therein is the connection. Fiorillo has long postulated that

Cretaceous Alaska could have been the thoroughfare for fauna between Western North America and Asia — two continents that shared each other’s fauna and flora in the latest stages of the Cretaceous.

“This study helps support the idea that Alaska was the gateway for dinosaurs as they migrated between Asia and North America,” said Dr. Kobayashi.

To support the theory, Fiorillo’s international team of scientists from across the U.S., Japan and South Korea worked to establish if the tracks were those of a therizinosaur and to study any unique aspects of the ecosystem. The members — including a sedimentologist, geologist, paleobotanist, paleoecologist and additional paleontologists including an expert on therizinosaurs — determined that this particular area of Denali was a wet, marsh-like environment and that one fossil in particular looked like a water lily, which supported the theory that there were ponds and standing water nearby. They suspect that both therizinosaurs and hadrosaurs liked these wetter locations.

Fiorillo believes that this Alaskan discovery may connect these animals environmentally and perhaps behaviorally to other therizinosaurs in central Asia. An Asian report of these animals being associated also came from an interval of rocks that was unusually ‘wet’ at the time, relative to rocks above and below it.

“This discovery provides more evidence that Alaska was possibly the superhighway for dinosaurs between Asia and western North America 65-70 million years ago,” added Fiorillo.