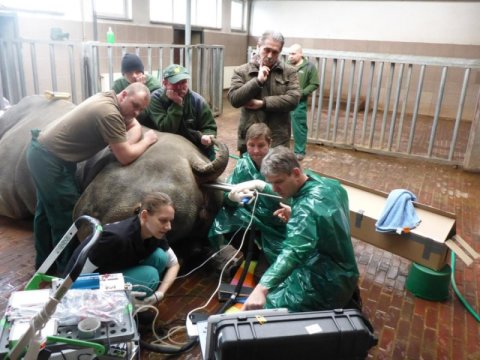 Northern White Rhinos (NWR) are functionally extinct, as only two females of this species are left on the planet. An international team of scientists has now successfully created hybrid embryos from Southern White Rhino (SWR) eggs and NWR sperm using assisted reproduction techniques (ART). This is the first, ever reported, generation of blastocysts (a pre-implantation embryos) of rhinos in a test tube. Additionally, the international team established stem cell lines from blastocysts of the SWR with typical features of embryonic stem cells. This breakthrough is published in Nature Communications today.

“These are the first in vitro produced rhinoceros embryos ever. They have a very high chance to establish a pregnancy once implanted into a surrogate mother,” says Prof Thomas Hildebrandt, Head of the Department of Reproduction Management at the German Leibniz Institute for Zoo and Wildlife Research (Leibniz-IZW) in Berlin. An international team of researchers successfully managed to adapt reproduction techniques used in horses to the special circumstances of rhino species, opening up the potential to bring back NWR from the brink of extinction. This would be achieved by adopting the procedure pioneered here, to oocytes to be collected from the last two living NWR females. Female SWR could act as surrogate mothers to a fledging NWR population. In contrast to NWR, there are approximately 21,000 SWR in Southern Africa today.

Using a recently patented nearly two-meter long technical device, the scientists were able to repeatedly and safely collect oocytes from rhinos. The ultrasound-guided device is placed trans-rectally. Once a follicle shows up on the screen of the ultrasound-laptop a special needle can be activated to puncture through the intestinal wall into the ovary and to harvest the oocyte from the follicle.

An early-stage embryo developed outside the rhino

The oocytes were collected from SWR females in European zoos and then shipped to AVANTEA, a world leader in assisted reproduction technologies (ART) for large animals in Italy. “In our lab we were able to develop procedures to mature the oocytes, fertilise them by intracytoplasmic sperm injection (ICSI) and culture them. For the first time we had rhino blastocysts — an early stage of an embryo — developed in vitro, similarly to what we do routinely for cattle and horses,” reports Prof Cesare Galli, from AVANTEA in Cremona, Italy. Several embryos are now cryopreserved for future transfer into surrogate mothers to carry a pregnancy to term.

“For fertilisation, the cryopreserved semen from deceased NWR males was used. The successful development of a hybrid embryo is a major step towards the first birth of a Northern White Rhino through artificial reproduction techniques. Already, a half of the hybrid embryo genetic information comes from the NWR,” comments Jan Stejskal, Director of International Projects at the Safari Park Dvur Kralove in the Czech Republic. Both of the last two NWR females were born in Dvur Kralove; and currently they reside in custody at Ol Pejeta Conservancy near Mount Kenya.

“Our results are solid, reproducible and very promising. Now we are well prepared to go to Kenya and collect oocytes from the last two NWR females in order to produce pure NWR blastocysts where both eggs and sperm are from NWR,” Hildebrandt comments. The scientists performed more than twenty oocyte collections in SWRs within Europe, generating more embryos than those reported in the publication. They are currently working on the embryo transfer procedure.

However, because there are only two females left and the available semen comes from only four males, assisted reproduction and in vitro fertilisation techniques alone would likely not suffice to create a self-sustaining population of NWR with the necessary genetic diversity. This is why the scientists are working on an additional approach. The plan is to generate gametes through stem cell technology. “In the future our goal is to produce in vitro primordial germ cells from iPS cells (induced pluripotent stem cells) obtained from somatic cells, cryopreserved in the past, of several NWR individuals. In a second step these germ cells will then be transformed into eggs and sperm,” explain Dr Sebastian Diecke, stem cell expert at the Max Delbrueck Center for Molecular Medicine in the Helmholtz Association (MDC) in Berlin, Germany, and Prof Katsuhiko Hayashi, stem cell expert at the Department of Stem Cell Biology and Medicine, Kyushu University, Japan. This would enlarge the founding genetic diversity of the future NWR population substantially.

Combining stem cell research with the now developed ART will provide a blueprint on how to save highly endangered species that have already dwindled to numbers that make conventional conservation efforts impossible.

“Pluripotent stem cells have the ability to self-renew indefinitely and to develop into any cell of a living organism. We — at Avantea — successfully generated SWR embryonic stem cells with all the features of undifferentiated cells and a high capacity for differentiation in different cell lineages,” Prof Cesare Galli reports. The embryonic stem cell lines obtained in this study have now been transferred to Dr Diecke’s lab, as they will serve as a blueprint to differentiate iPS cells into germ cells and eventually gametes.

A race against time — and every donation helps

Northern White Rhinos are the most endangered mammals on earth. All conservation efforts to save this species have been foiled by human activities such as poaching, civil war and habitat loss. This resulted in a reduction of the population from 2,000 individuals in the 1960s to just two remaining females today. In March 2018 the last NWR male — Sudan — died of old age.

“This research is groundbreaking. We are witnessing the development of a method that can help to compensate the negative impact of humans on nature. We are very thankful for all donations received from private people supporting our race against time. We hope that the current achievement will help us to convince more people as well as public authorities that this new approach is feasible and worth supporting,” Steven Seet, Head of Press & Communications at the Leibniz-IZW, remarks.