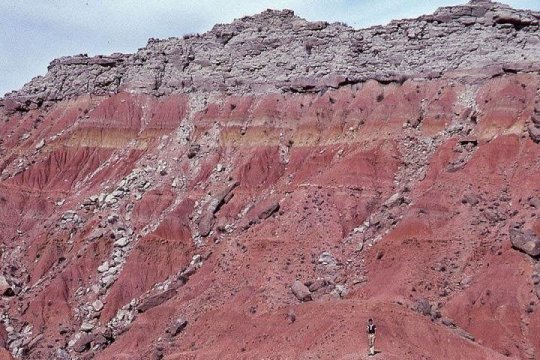 Ancient wildfires played a crucial role in the formation and spread of grasslands like those that now cover large parts of the Earth, according to scientists at Penn State and the Smithsonian National Museum of Natural History.

A new study links a large rise in wildfires nearly 10 million years ago, in the late Miocene, with a major shift in vegetation on land, as indicated by carbon isotopes of plant biomarkers found in the fossil record. Frequent, seasonal fires helped turn forested areas into open landscapes, and drove the expansion of grasslands, the researchers said.

The team developed an innovative approach to test the role of fire in the rise of early grasslands. They analyzed tracers of ancient leaves and of burned organic matter left behind in paleosols, or fossil soils, in northern Pakistan.

“The tools we use are molecules and biomarkers produced by organisms in Earth history and preserved in rocks,” said Allison Karp, a graduate student in geosciences at Penn State and lead author on the paper. “We can use these as clues to figure out what was happening with climate and ecology in the past.”

The new technique has broad implications as a tool for scientists seeking to answer questions about past vegetation and climate change, the researcher said.

This shows that the tool can pinpoint the location of a fire where it occurred, according to Karp. “In a paleosol record you are really capturing an integrated picture of what was happening when the soil was forming,” she said.

The researchers recently reported their findings in the Proceedings of the National Academy of Sciences. Katherine Freeman, Evan Pugh University Professor of Geosciences at Penn State and Karp’s adviser, is a co-author on the paper.

“This is one of the biggest ecological changes in the last 66 million years,” said Karp. “None of the open grassland systems we have today existed before this transition. It was a very different looking world, especially in sub-tropical places like Pakistan.”

Scientists have long studied the rise of C4 grasslands, named after plants that evolved a new way to handle photosynthesis that allows them to thrive in dry, tropical conditions and with lower amounts of carbon dioxide. These plants include modern crops like corn and sugarcane.

A drop in global carbon dioxide levels was once believed to be behind the rise of C4 grasslands. More recent research has shown that the grasses spread at different rates on different continents, indicating that regional factors, like rain patterns — and potentially fire — played important roles. But there had been little direct evidence that linked a rise in wildfires to this transition.

“We were interested in reconstructing fire and the expansion of grasslands in the same geologic record to see if we could find proxy evidence of the role fire played,” Karp said. “We now have a nice line of observational evidence to compare to what the models have said.”

Karp and her collaborators used polycyclic aromatic hydrocarbons (PAHs), found in paleosols, as fire proxies. PAHs are chemicals that are created by the burning of organic matter like wood and plants. They also are naturally found in coal and crude oil.

PAHs increased five-fold across the study area while evidence of conifer trees declined and ultimately disappeared. The heavily forested landscape opened up in two stages. Around 10 million years ago, forests were replaced by more fire-prone, open woodlands or grasslands, and between six and eight million years ago, C4 grasslands became dominant just as the quantity of fire signatures sharply increased.

Modern fire ecology can explain the process. Grasses grow faster than trees after a fire and they also help create conditions ripe for subsequent fires, promoting open landscapes. In the late Miocene, wet seasons brought on by monsoon conditions encouraged plant growth, which in turn created more fuel for fires during hot, dry seasons in Pakistan.

“The role fire played in the expansion and evolution of grassland systems in deep time is important because understanding how fire has maintained systems in the past can help us predict what may happen to these important systems in the future as climate continues to change,” Karp said.

The new fire marker approach could be used to examine landscape-scale interactions between fire and vegetation for other geographic regions and climactic transitions, like glacial-interglacial transitions or catastrophic climate-change events, researchers said.