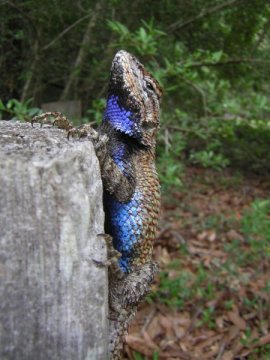 Physical traits and behaviors that make a lizard sexy — features used to attract potential mates and fend off competitors — may be important enough that they do not change in the face of stress. A new study by researchers at Penn State reveals that the blue and black badges on the throats and abdomens of male fence lizards — and signaling behaviors used to show them off — are not affected by low levels of stress-associated hormones, unlike many other traits. A paper describing the results appears in the journal Scientific Reports.

“Animals in the wild experience stress every day when they flee from predators, fight with others over food, or face extreme weather,” said Kirsty MacLeod, a postdoctoral scholar at Penn State at the time of the research and lead author of the paper. “But they are facing increasing amounts of stress due to increased interactions with people, a changing climate, and other anthropogenic changes. Because of this, it is rapidly becoming more important to understand the myriad effects of stress on population health.”

The researchers studied the effects of stress on “secondary sexual traits,” which, like a deer’s antlers or a bird’s brilliant colors, are important in attracting mates or warding off potential rivals, and ultimately contribute to an animal’s ability to reproduce. Specifically, they studied the blue and black badges that appear on the throats and abdomens of male eastern fence lizards.

“Secondary sexual traits are the billboard ads animals use to advertise their condition,” said MacLeod. “Being more colorful or having bigger ornaments — like antlers — than your neighbor, could mean the difference between mating and passing on your genes, or not mating at all. They also help in maintaining a great territory that can provide resources for your offspring and preventing constant attack by rival males. If stress affects these secondary sexual traits, it could affect which individuals are successful in mating or holding territories, which could in turn affect the evolution and persistence of these populations — even though these traits are often not thought of as being central to population health.”

The research team found that the color of a lizard’s badges is not related to the normal circulating levels of the stress hormone corticosterone in their blood. Additionally, artificially elevating levels of corticosterone, replicating the elevation that occurs when a lizard encounters a stressor like a predator, repeatedly over the course of a few weeks did not affect badge color.

In addition to investigating the physical trait of badge color, the research team also looked at how the trait is displayed through behaviors. Much like a male peacock might raise its colorful tail, fence lizards perform push-ups and bob their heads to show off their badges, warding off other males or attracting potential mates.

“If stress did not affect color but did affect the behavior, for example if lizards stopped doing pushups, then it wouldn’t matter if their color was the same because it wouldn’t be seen,” said MacLeod. “It would be like having a big flashy billboard lying on the ground.”

The team found that elevating stress hormones did not affect signaling behaviors, including the number of pushups or head bobs that the lizards performed.

“We know that elevating stress hormones can have important effects in this lizard species, including on immune function and behaviors that allow them to deal with predators, so these results are particularly interesting,” said Tracy Langkilde, professor and head of biology at Penn State and senior author of the paper. “It may be that low-level stress is not enough to impact these traits. Or that sexual signaling — to find better mates and maintain better territories — is so important that, when lizards experience stress, more resources are allocated to maintain them.”

Next, the researchers plan to investigate whether maintaining these signaling traits under stress has an increased physiological cost on other aspects of lizard health and survival.

The researchers also emphasize that sharing negative results like these, which show that a factor of interest does not have an effect, is valuable, as they provide meaningful information and can challenge the status quo.

“It’s always cool to show that something you expected to have an impact on animals, like stress, does so, but it’s equally important to show where there is no impact,” said MacLeod. “If we only reported results that show stress having an impact, we might over-estimate the effects of stress. Our results suggest that animals are resilient to stress where it matters: in the context of sexual signaling, which is likely to be critical in determining their ability to successfully reproduce.”