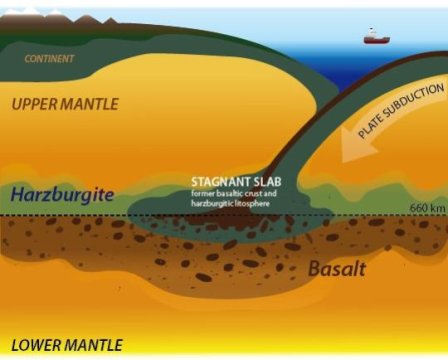 Professor Tetsuo Irifune of the Geodynamics Research Center (GRC) of Ehime University heads a research group investigating the Earth’s interior by means of experiments at extreme pressures and temperatures, simulating those expected in the deepest regions of our planet.

Using a combination of ultrasonic techniques and a large volume press apparatus, GRC researchers were successful in measuring the sound velocities of CaSiO3 perovskite (CaPv), an important mineral of the mantle at depths below 560 km. This result allowed them to directly interpret seismic observations by a comparison with their velocity profiles obtained in the laboratory, and derived some composition models for the regions across the 660 km depth discontinuity that marks the boundary between the upper and lower mantle.

The scientific article that presents their results was published on January 10 in the journal Nature.

CaPv constitutes 7-10 vol% of the pyrolitic mantle and up to 30 vol% of subducted basaltic rocks below ~560 km depth and therefore is an important constituent mineral in both the mantle transition region (MTR; 410-660 km in depth) and lower mantle (660-2900 km in depth). CaPv also plays an important role in immobilizing heavy elements such as rare earth elements or actinides in the mantle due to its large calcium site, which can easily accommodate such large elements. But despite such importance, no measurements of sound velocities have been made CaPv at high temperatures, because this phase is unstable at ambient conditions and hence there was no adequate sample for such measurements.

“Because CaPv is only stable at pressure and temperature conditions of the mantle, we designed an experiment that allows us to synthesize this phase with the adequate shape and dimension under high pressure, then subsequently send an acoustic wave directly into the pressurized sample. Using this new approach, we can study high-pressure minerals, which are not stable at atmospheric conditions, such as CaPv.” says Steeve Gréaux, the researcher leading this project.

Professor Irifune and his team already demonstrated in 2008, that pyrolite, a hypothetical rock composition derived as a mixture of basalt and peridotite agree well with geophysical observations at depths down to 560 km, which was also reported in Nature. However, at that time, they could not draw further conclusions at depths lower than 560 km because there was no available data on CaPv. Their 2019 results became the last piece of a puzzle and allowed them to complete their hypotheses for the seismic structure of the mantle in between the depths of 560 km and 800 km.

“We did find that the cubic form of CaPv, which is most likely to be present in the mantle, has lower velocities than what was formerly predicted by theoretical studies. This result refutes previous models that proposed formation of CaPv in pyrolite could explain the steep velocity gradient above a depth of 660 km. On the other hand, it is in good agreement with a former study proposing the presence of basalts beneath a depth of 660 km on the basis of density measurements.” says Tetsuo Irifune.

These new results indeed show that the presence of subducted oceanic crust can explain the magnitude of the reduction of shear velocity below a depth of 660 km, as observed beneath North America. Incidentally, the model they proposed is very consistent with the recent discovery, in 2018, of CaPv in a natural diamond, which provides evidence for the presence of oceanic crust material in the uppermost lower mantle. It is also compatible with global-scale geodynamics calculations that predicted basalt enrichment beneath 660 km would stabilize the subducted slab in this region.

The authors conclude “CaPv, which was once called “invisible” in the lower mantle as this phase was predicted to have velocities similar to those of the most abundant mineral (MgSiO3 perovskite or bridgmanite) in fact holds velocities substantially lower than those of bridgmanite at depths of 660-800 km, which should greatly contribute to tracing the existence and recycling of the former oceanic crust in the Earth’s lower mantle..”

Materials provided by Ehime University. Note: Content may be edited for style and length.