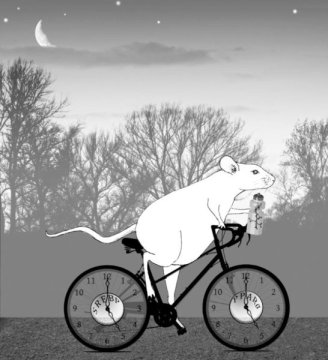 Mice fed a fattening diet develop new liver circadian rhythms that impact the way fat is accumulated and simultaneously burned, according to a new study published in Cell by researchers in the Perelman School of Medicine at the University of Pennsylvania. The team found that as liver fat production increases, surprisingly, so does the body’s ability to burn fat. These opposing physiological processes reach their peak activity each day around 5 p.m., illustrating an unexpected connection between overeating, circadian rhythms, and fat accumulation in the liver.

“We know that obesity leads to accumulation of fat in the liver, which can cause inflammation and possibly hepatitis, liver failure, and even liver cancer,” said senior author Mitchell Lazar, MD, PhD, director of Penn’s Institute for Diabetes, Obesity, and Metabolism, and chief of the division of Endocrinology, Diabetes and Metabolism. “This is rapidly becoming a huge problem, as these conditions can lead to an increased need for liver transplantation, and worse, can be deadly.”

While one billion people worldwide are adversely affected by malnutrition, there are another billion who experience excess calorie intake, or “overnutrition,” which leads to obesity and other metabolic disorders including type-2 diabetes, cardiovascular disease, fatty liver, hypertension, and cancer. “Studying the harmful effects of overnutrition is a top priority, especially in the United States where metabolic disorders have reached epidemic proportions,” Lazar said.

The circadian rhythms that fat creation and burning follow are physiological processes that occur with about every 24 hours. At the molecular level, these cycles involve feedback loops of core clock proteins expressed in virtually every cell of the body. This internal timekeeper functions to integrate environmental stimuli and genetic information to control rhythmic gene expression in a tissue-specific way.

A misalignment of this schedule is increasingly recognized as a risk factor for metabolic disorders. For example, night shift workers and individuals with sleep disorders have an increased risk of metabolic diseases. Understanding the mechanisms that impact the relationship between circadian rhythms and metabolic disorders are necessary for the development of meaningful therapeutic strategies for treating obesity-related diseases.

“We speculate that the diet-induced synchronization of these opposing liver fat metabolic processes is a response to an environment of overnutrition, leading to fat burning outpacing fat accumulation in the liver,” said first author Dongyin Guan, PhD, a postdoctoral fellow in Lazar’s lab.

The 24-hour clock aspect of this physiology informs the practice of chronotherapy, which involves administering drugs at times when they are most impactful and tolerated in order to enhance effectiveness and reduce toxicity. The team discovered that the rhythm of fat burning is controlled by a protein called PPAR-alpha, which is the target of drugs called fibrates, which are already used to lower lipids in the blood. The amount of PPAR-alpha in the liver also peaked around 5 p.m.

Similar to how statins (cholesterol-lowering drugs) are prescribed to be taken at bedtime, “our results support that due to the rhythmicity of PPAR-alpha, drugs that lower liver and blood lipid levels could be more effective at specific times of day,” Lazar said. “Following this principle more closely to treat liver metabolic disease may indeed benefit patients, as recent studies have shown that PPAR-alpha expression oscillates in the human liver.”