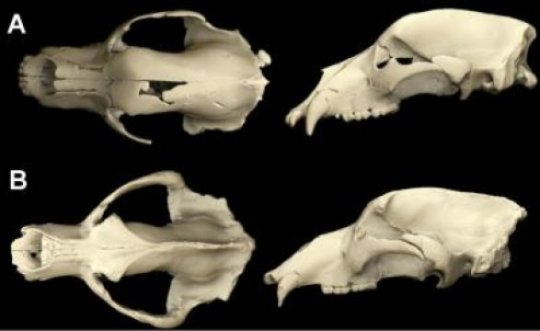 Until now, very little is known about the dietary evolution of the cave bear and how it became a vegetarian, as the fossils of the direct ancestor, the Deninger’s bear (Ursus deningeri), are extremely scarce.

However, a paper published in the journal Historical Biology, sheds new light on this. A research team from Germany and Spain found that Deninger’s bear likely had a similar diet to its descendant — the classic cave bear — as new analysis shows a distinct morphology in the cranium, mandible and teeth, which has been related to its dietary specialization of a larger consumption of vegetal matter.

To understand the evolution of the cave bear lineage, the researchers micro-CT scanned the rare fossils and digitally removed the sediments so as not to risk damaging the fossils. Using sophisticated statistical methods, called geometric morphometrics, the researchers compared the three-dimensional shape of the mandibles and skull of Deninger’s bear with that of classic cave bears and modern bears.

“The analyses showed that Deninger’s bear had very similarly shaped mandibles and skull to the classic cave bear,” explains Anneke van Heteren, lead-author of the study and Head of the Mammalogy section at the Bavarian State Collection of Zoology. This implies that they were adapted to the same food types and were primarily vegetarian.

“There is an ongoing discussion on the extent to which the classic cave bear was a vegetarian. And, this is especially why the new information on the diet of its direct ancestor is so important, because it teaches us that a differentiation between the diet of cave bears and brown bears was already established by 500 thousand years ago and likely earlier,” says Mikel Arlegi, doctoral candidate at the Universities of the Basque Country and Bordeaux and co-author of the study.

Interestingly, researchers also found there are shape differences between the Deninger’s bears from the Iberian Peninsula and those from the rest of Europe, which are unlikely to be related to diet.

They have come up with three possibilities to explain these differences: 1) the Iberian bears are chronologically younger than the rest, 2) the Pyrenees, acting as natural barrier, resulted in some genetic differentiation between the Iberian bears and those from the rest of Europe, 3) there were multiple lineages, with either just one leading to the classic cave bear, or each lineage leading to a different group of cave bears.

“However, more fossils are necessary to test these three hypotheses,” Asier Gómez-Olivencia, Ikerbasque Researcher at the University of the Basque Country said.