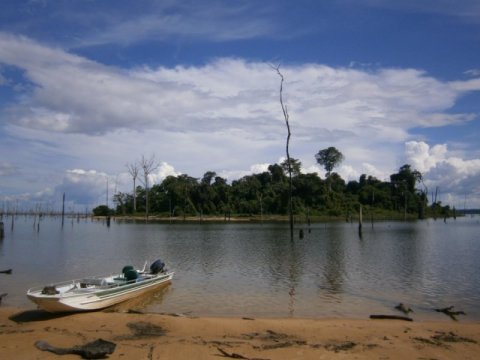 Mega-dams should not be built in lowland tropical forest regions due to the threat they pose to biodiversity and ecosystems, according to experts at the University of Stirling.

The recommendation — published in the Journal of Applied Ecology — emerged from a new study that focuses on the Balbina Hydroelectric Reservoir system in the Brazilian Amazon. Like many hydropower systems in the region, the Balbina dam caused extensive forest fragmentation, with large swathes of land flooded once the dam was closed, transforming former hilltops into islands.

The combined area of forest islands created during reservoir filling is not currently explicitly considered in the Environmental Impact Assessment and licensing process of dams. Experts found that tree communities on Balbina’s islands are “unstable,” with some rare species becoming extinction-prone due to reduced tree recruitment and density. This could potentially lead to future losses in biodiversity and ecosystem functioning, such as carbon storage, across Balbina’s 3,500 reservoir islands.

Dr Isabel Jones, the ecologist from Stirling’s Faculty of Natural Sciences who led the research, said: “Ideally, we recommend that dams should not be constructed in lowland tropical forest regions such as the Amazon basin, due to the far-reaching impacts of river impoundment on aquatic and terrestrial biodiversity. However, where no alternative is available, we hope to improve the environmental impact procedure and impact mitigation of future dams, by providing robust recommendations regarding dam development and operation.”

Flooding associated with the construction of mega-dams in lowland tropical forest regions can negatively affect biodiversity through the loss of terrestrial and aquatic habitats. Worldwide, dams have displaced between 40 and 80 million people leading to significant social impacts.

In addition, reservoirs in tropical regions such as the Amazon basin can emit significant amounts of greenhouse gases including methane, which can make tropical dams far less ‘green’ than other renewable sources. Despite this, dam construction in Amazonia is increasing, with more than 280 new dams planned or already under construction, risking future impacts to a region that is critical for the global climatic balance and biodiversity.

The new study assessed the long-term impact of dam-induced fragmentation on tropical tree communities isolated on islands following dam construction, with the aim of generating robust recommendations for dam developers and decision-makers to mitigate some of the detrimental impacts associated with dam development.

The research was carried out across 89 permanent forest survey plots on 36 islands across Balbina, as well as three nearby mainland continuous forest sites. The network of forest survey plots is the most extensive established within a hydroelectric dam system. Large trees were surveyed in 2012 and saplings in 2014.

Dr Jones explained: “Our research found that islands within the Balbina Hydroelectric Reservoir harboured significantly lower densities of adult and sapling trees, compared to mainland continuous forest. In other words, tree biomass is being lost on those islands. This is important to know considering the carbon emissions associated with tropical forest loss and degradation.

The researchers also found that fires — which can spread through reservoir island systems in periods of drought when water levels are not maintained — can cause even more degradation to tree communities and that the damage is particularly severe for hard-wooded species, those which store the most carbon.