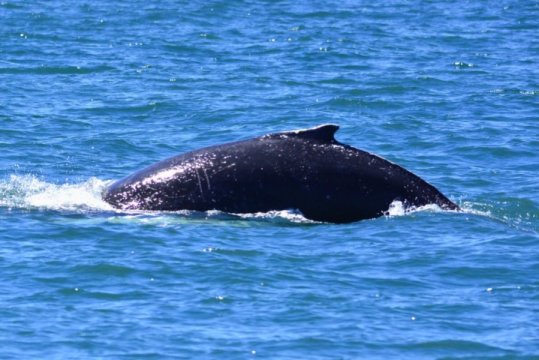 Although the presence of humpback whales in the Mediterranean has been considered unusual, it is known that their visits have increased in the last 150 years. Until now, there had been no clear reason to justify this fact, with various options being considered, such as disorientation, following the migratory routes of other species, etc. However, a recently published study by experts from the University of Seville and from the Biological Research Area from the Seville Aquarium indicates that what motivates these cetacean mammals to enter these waters is the search for food.

This species travels long migration routes from the poles (both North and South), where the feeding areas are found, to the Equator to reproduced in the 15 DPS reproduction areas detected by the scientific community until now.

“In spring of 2016, a single young humpback whale was detected alongside a boat used from sighting cetacean mammals in the area. For almost a month, it was possible to follow the animal within the bay of Algeciras, taking exhaustive data, accompanied by photographs for photo-identification and future tracking of the animal, as well as for checking that the animal did not have any kind of problem,” informs José Carlos García-Gómez, direct of the Marine Biology Laboratory at the University of Seville.

The whale was observed for two periods of consecutive days that coincided with spring tides, but was not observed during the period of neap tides. During the periods of observation, the whale exhibited feeding behaviour, diving for different periods while surrounded by ferries, cargo ships, and commercial and recreational activities. In addition, some of this species’ possible prey was detected (both living and stranded on the coasts of the area), such as sandy swimming crabs (Liocarcinus depurator), northern krill (Meganyctiphanes norvegica) and spotted lanternfish (Myctophum punctatum), which can rise to the surface to capture their prey.

“This event gave us a clue as to the reason for the presence of this species of whale in this sea,” the researcher states.

The fact that the majority of animals seen are young (apart from a historic sighting of a mother and calf) and also alone, together with what has been previously expressed, indicates that these whales probably come from the North Atlantic, with two Atlantic reproduction areas towards the south, towards which they migrate, DPS1 and DPS2, which were already determined by other experts.

“In recent years, there have been changes both in climatic conditions and in the temperature of the sea, something which has been verified by many studies. If we add the exact coincidence of krill blooms in the Strait of Gibraltar with the presence of these whales, this could perhaps tell us that, in the near future, sightings of this species could increase in the Mediterranean. For this reason, it is considered imperative to implement preventive contingency and conservation plans for the species in this sea,” adds José Carlos García.