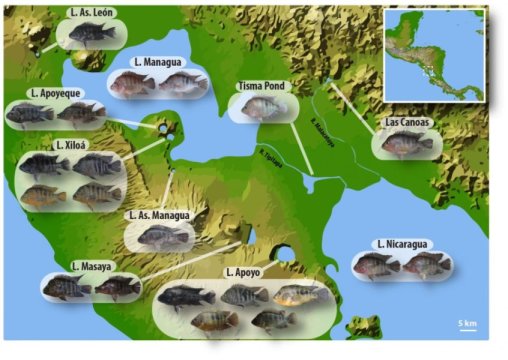 For every two species of mammal there is one species of cichlid fish, which goes to show that biodiversity is distributed rather unevenly among animals. But why? And to what extent can evolution be predicted? A variety of “internal” as well as ecological factors play a role. One decisive factor could be ecological conditions, i.e. the number of different habitats and the similarity of ecological niches available. That is one reason for why there are so many species in the tropics. The demographic history of a population can also influence biological diversity: Is the level of genetic variation in a population sufficient to allow it to adapt to ecological niches? Did the population have enough time to do so? Quantifying all potential factors that contribute to biological diversity, even for only one group of animals, is not easy, not to mention that comparing mammals with a group of fish would be like comparing apples and oranges.

The fallacy of comparing apples and oranges is something that Dr Andreas Kautt, who is now a post-doctoral researcher at Harvard University, is acutely aware of. It does not apply to his research, however, since during his doctoral studies at the University of Konstanz he focused entirely on cichlids. His studies demonstrate just how “deterministic” evolution can be — even among as diverse a family as cichlids, a paramount example of evolutionary diversity and “creativity.” “Imagine 500 to 1,000 species of cichlids living in one of the African Great Lakes, one of the largest freshwater habitats in the world. The degree of complexity is unimaginable. Even the genealogical relationships between the cichlid species living in these lakes have only partially been resolved,” says Professor Axel Meyer’s former doctoral student. Meyer’s evolutionary biology team, which is based at the University of Konstanz and is funded by an ERC Advanced Grant in the amount of € 2.5m, currently pursues a project that seeks to answer the following questions: Why does nature produce this unimaginable amount of different species? What are the origins of biodiversity? How predictable is evolution? Why does evolution repeat itself?

In a new publication in the journal Evolution Letters, Axel Meyer, Andreas Kautt and Dr Gonzalo Machado-Schiaffino, a former staff member in Meyer’s research team who is now an assistant professor at the University of Oviedo in Spain, are able to identify some of the factors that contribute to recurrent patterns of diversity and similarity in cichlids. Andreas Kautt puts the question prompted by their findings like this: “Which factors lead to similar outcomes and thereby help us predict evolution?”

Since the African Great Lakes are incredibly diverse, Axel Meyer’s research team focuses not only on them, but also studies a more recent and simple “natural evolutionary experiment” involving parallel species of Nicaraguan Midas cichlids, which occur in the two great lakes as well as in a chain of crater lakes in Nicaragua. They investigate the morphology, population genetics and habitats of the crater lake populations, comparing the results with those results obtained for members of the source population living in the great lakes of Nicaragua. Due to their smaller size, the crater lakes are not only less complex. An added advantage is that their maximum age has been determined. From an evolutionary perspective, with an age of between 1,000 and 24,000 years, they are very young, which makes them easier to study.

Based on statistical analyses of ecological data and a large amount of genetic information, Kautt et al. arrive at the following conclusion: “The more similar the habitat of the crater lake is to that of the large source lake, the more similar the fish are to each other.” This suggests that it is the habitats — and not demographic criteria — that are decisive for the predictability of diversity. The data collected by the University of Konstanz biologists shows that, compared to the source population, the morphology of all crater lake populations has diversified mostly in the same direction: The crater lake fish all very quickly evolved body shapes that are longer and more slender than those of their cousins from the great lakes.

The importance of these ecological factors can further be demonstrated by the fact that the diverse body shapes of the crater lake populations are closely related to the average depth of the lakes. Andreas Kautt comments: “It makes sense. The deeper a lake is, the more likely it is to provide various ecological niches, including in the deep open water.” All of this leads the researchers to conclude that, under certain conditions, evolutionary outcomes can be predicted.