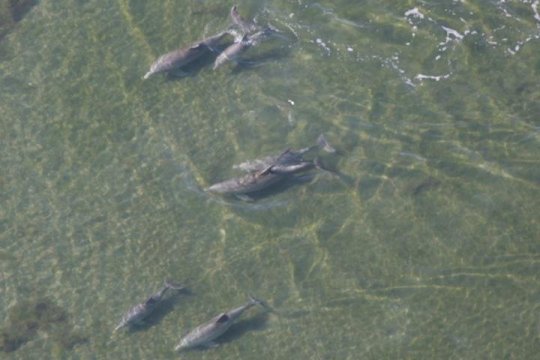 Dolphins, whales and other cetaceans are susceptible to many of the same health hazards as humans including mercury, brevotoxin (e.g. Red Tide), and lobomycosis. They also serve as important sentinel species to highlight concerns relevant to environmental and public health. Yet understanding how these aquatic mammals fight disease-causing pathogens, how they adapt to changing pathogenic threats, and how their immune responses are triggered has been challenging.

Two recent papers by Florida Atlantic University researchers reveal how cetaceans compete for survival in an evolutionary “arms race” with changing pathogen communities. As pathogenic threats and the risk of infectious disease changes, whales and dolphins must adapt to those changes. The question today is can they adapt fast enough?

In a groundbreaking study published in PLOS One, researchers from FAU’s Harbor Branch Oceanographic Institute found that cetaceans use several strategies for success in this evolutionary arms race. The immune response in vertebrates is mediated through a series of rapidly evolving genes called the major histocompatibility complex or MHC. The MHC acts as an early warning system against pathogens that not only sounds the alarm, but also activates an armed response. In order to do this, MHC proteins need to be able to distinguish “friend” from “foe” at a molecular level. Similar to a lock-and-key mechanism, an individual’s MHC ‘lock’ has to be able to bind to a pathogen’s peptide ‘key’ to launch the defense sequence.

The FAU team found that not only are these cetaceans preserving genetic diversity in the types of locks, that is, the conformation of the binding pockets that help trigger the immune response, they also are selecting for diversity in how to regulate the production of the many locks that are needed. MHC is regulated to prevent too much activity, where the immune system might attack one’s own cells as well as too little activity, where the immune system does not react quickly or strongly enough to a real threat.

“This is the first attempt within cetacean populations to use both MHC conformation and regulatory genetic variation as early indicators for disease susceptibility,” said Heidi J.T. Pagan, Ph.D., lead author of the study and a research associate at FAU’s Harbor Branch.

Pagan and collaborators wanted to develop a more comprehensive MHC marker system for cetaceans and combine traditional and next generation sequencing methods for genotyping. They applied this marker system to investigate the evolutionary and demographic forces shaping dolphin MHC diversity in contrasting estuarine and marine habitats.

By combining these genetic data with an immunoproteomic approach developed by Colette T. Dooley, Ph.D., at Torrey Pines Institute for Molecular Studies, the researchers now have a much more inclusive picture of how whales and dolphins are continuing to adapt to their current pathogenic environment.

Dooley applied immunogenetic and immunoproteomic techniques and model combinatorial libraries to figure out what types of peptides (‘keys’) the MHC found in estuary and coastal bottlenose dolphins in Florida were capable of recognizing. From there, she used bioinformatics to determine what microorganisms likely produce these signature molecules.

“For the first time, we have a clear idea of the pathogens involved, and we now have a roadmap for research teams working on other species, including humans, to use to get there,” said Dooley, who published these findings with the FAU team in PLOS One in August. “These insights will enable us to improve predictions of population health for these cetaceans that are exposed to a particular disease threat.”

Bottlenose dolphins reside in nearshore waters along Florida’s Atlantic coast as well as in a number of estuaries, bays, and lagoons, including the 256 kilometer-long Indian River Lagoon (IRL) Estuary System. Coastal populations have been found to be demographically and genetically distinct from a number of these embayed and lagoon populations, although some gene flow and movement also has been documented.

Chemical contamination, high nutrient input, decreased salinity, loss of sea grass habitat, and eutrophication have all culminated in poor habitat quality in the IRL Estuary System. Disparity between populations and even individual susceptibility to diseases has been documented for several cetaceans and is often linked to concentrations of immunosuppressive contaminants.

“With these breakthroughs, we now finally have the tools to assist wildlife managers and health professionals assess disease risk from the perspective of how individual animals are engineered to recognize the molecules of microorganisms in the environment and launch an immune response,” said research team lead Greg O’Corry-Crowe, Ph.D., a research professor at FAU’s Harbor Branch. “We now need to bring these tools directly into the field and to apply them to other species.”

In 2013, an unusual number of Atlantic bottlenose dolphins died along the east coast of Florida all the way down to the Florida Keys. Yet dolphins in the Gulf of Mexico were not affected. This suggested to the researchers that multiple factors may influence the spatial variation of disease transmission and affect neighboring populations to varying degrees.

“Although we have learned a lot about variation in the kinds of ‘locks’ vertebrate populations possess, we knew very little about the confirmation of pathogenic ‘keys’ until now,” said O’Corry-Crowe.

“This issue has become a huge obstacle in applying studies of MHC diversity to real-world assessments of the capabilities of wild populations to deal with disease threats.”