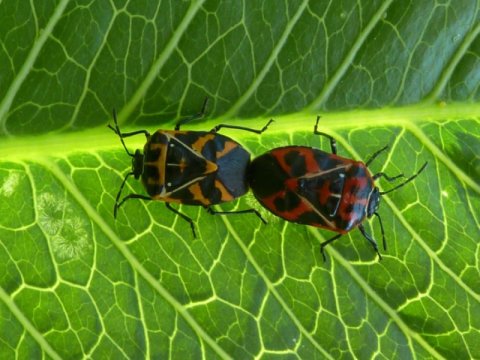 For stink bugs to attract a mate or to communicate that they have found food, they use their own chemical language: pheromones.

Virginia Tech researchers have discovered insights into this chemical language, which can be used to develop alternative pest controls.

“We have gained a deeper understanding of how stink bugs synthesize pheromones, and this knowledge may allow us to produce pheromones in expendable food crops — also called ‘trap crops’ — to lure the bugs away from cash crops,” said Dorothea Tholl, a professor of biological sciences in the College of Science and a Fralin Life Science Institute affiliate.

These new environmentally friendly and sustainable alternatives to insecticides could save farmers millions of dollars.

In Virginia, crops such as grapes, sweet corn, and apples, have been under attack by the invasive brown marmorated stink bug since 2004; cabbage has also been affected, but by the harlequin stink bug. A relative, the southern green stinkbug is also a severe pest worldwide and attacks many different crops including beans and soybeans.

Tholl is interested in the chemical communication of organisms and studies how this chemical language has evolved in insects. With support by a grant from the USDA National Institute of Food and Agriculture, her lab investigates the enzymes that produce stinkbug pheromones in an interdisciplinary collaboration with colleagues at Virginia Tech and national and international institutions.

Her team’s research has recently been published in the journal Proceedings of the National Academy of Science, or PNAS.

“Our recent paper provides valuable insight into our understanding of how insects synthesize complex sesquiterpene compounds that are typically used as pheromones. The work could pave the way in the future for plants to manufacture insect pheromones, which could be utilized in pest surveillance and pest management strategies, such as attract and kill,” said Thomas Kuhar, a professor of entomology in the College of Agriculture and Life Sciences and a Virginia Cooperative Extension specialist.

Very little was known about the biosynthetic evolution of these insect pheromones, and the research of Tholl’s team has shown that stink bugs have their own enzymatic machinery to make pheromones without receiving them from symbiotic microbes or the host plant, as was previously thought.

“Pheromones for thousands of insects are known, but very little is known about the synthesis of the pheromones. This paper focuses on terpene derived pheromones from the harlequin stink bug Murgantia histrionica and encompasses many years of research. Besides the development of dead-end trap crops, this research may allow establishing “RNAi interference” type gene silencing mechanisms to disrupt the pheromone production of the insect,” said Lancaster.

Lancaster also found that other stink bugs such as the brown marmorated stink bug use enzymes in pheromone biosynthesis similar to that identified in the harlequin bug. Beyond the team’s current study on stink bug pheromones, the research may allow for exciting future discoveries in the biosynthesis of pheromones of other insects and their application in pest management.

Two of Tholl’s graduate students, Andrew Muchlinski and Bryan Lehner, are co-authors on the paper and contributed substantially to this research.

There is commercial interest in using the genetic tools developed by Tholl’s team to produce the pheromones via synthetic biology for application in the field to promote pest mating disruption.

“Overall, we are excited about the prospect that our research has the potential to develop new pest management techniques,” says Tholl.