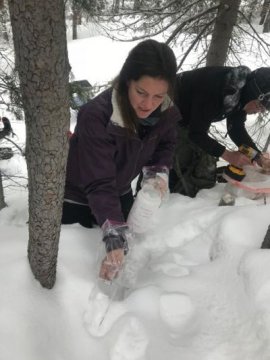 An innovative new project has discovered that animal footprints contain enough DNA to allow for species identification. Scientists have traditionally relied on snow-tracks and camera traps to monitor populations of rare carnivores, like Canada lynx, fishers and wolverines. These traditional techniques can tell part of, but not the entire story of an animal population, and are sometimes difficult to validate species identification.

The study, led by the USDA Forest Service, collected snow samples within animal tracks from known locations of collared or photographed animals. DNA was extracted from these samples and analyzed with cutting-edge genomic tools and newly developed molecular genetic assays to identify each species. They found these assays positively detected the DNA of each species in various snow samples and outperformed traditional lab techniques on previously undetectable genetic samples, which suggests that this method could revolutionize winter surveys of rare species by greatly reducing or eliminating misidentifications and missed detections.

“It was the craziest thing, we were talking about how we use environmental DNA to detect aquatic species and thinking, maybe we could do the same in snow, since it is just water after all,” said Thomas Franklin, a scientist with the USDA Forest Service National Genomics Center for Wildlife and Fish Conservation, who is lead author on the study. “This study shows that thinking outside the box and collaborating with researchers from other disciplines can pay real dividends in terms innovation and scientific advances.”

Monitoring for rare carnivores in the winter, using traditional methods, can be time intensive, expensive, and dangerous. “This new technique has the potential to make track misidentifications a thing of the past,” said Jessie Golding, a study co-author and scientist with the USDA Forest Service. What this means for managers is gained efficiency and accuracy, and that better information will be available to help conserve these species of concern.