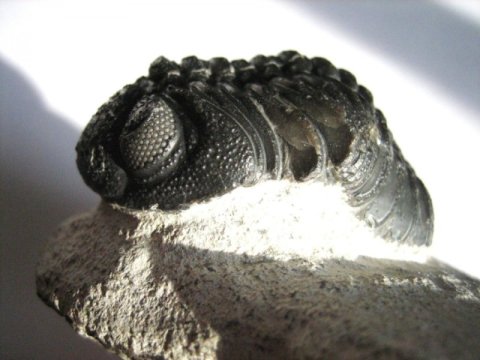 An international group of scientists led by researchers from the University of Bristol have advanced our understanding of how ancient animals saw the world by combining the study of fossils and genetics.

Ancestors of insects and crustaceans that lived more than 500 million years ago in the Cambrian period were some of the earliest active predators, but not much is known about how their eyes were adapted for hunting.

Work published in the Proceedings of the Royal Society B today suggests that when fossil and genetic data are assessed in tandem, previously inaccessible and exciting conclusions about long dead species can be made.

By examining the morphological characteristics of fossils’ eyes, alongside the genetic visual pigment clues, a cross-disciplinary team led by a collaboration between the University of Bristol’s Davide Pisani, Professor of Phylogenomics in the School of Earth Sciences and Nicholas Roberts, Professor of Sensory Ecology in the School of Biological Sciences, were able to find that ancient predators with more complex eyes are likely to have seen in colour.

Professor Pisani remarked: “Being able to combine fossil and genetic data in this way is a really exciting frontier of modern palaeontological and biological research. Vision is key to many animals’ behaviour and ecology, and understanding how extinct animals perceived their environment will help enormously to clarify how they evolved.”

By calculating the time of emergence of different visual pigments, and then comparing them to the inferred age of origin of key fossil lineages, the researchers were able to work out the number of pigments likely to have been possessed by different fossil species. They found that fossil animals with more complex eyes appeared to have more visual pigments, and that the great predators of the Cambrian period may have been able to see in colour.

Dr James Fleming, Professor Pisani and Roberts’ former PhD student, explained: “Animal genomes and therefore opsin genes (constituting the base of different visual pigments) evolve by processes of gene duplication. The opsin and the pigment that existed before the duplication is like a parent, and the two new opsins (and pigments) that emerge from the duplication process are like children on a family tree.

“We calculated the birth dates of these children and this allowed understanding of what the ancient world must have seemed like to the animals that occupied it. We found that while some of the fossils we considered had only one pigment and were monochromat, i.e. they saw the world as if looking into a black and white TV, forms with more complex eyes, like iconic trilobites, had many pigments and most likely saw their world in colours.”

The combinations of complex eyes and multiple kinds of visual pigments are what allows animals to distinguish between different objects based on colour alone — what we know as colour vision.

Professor Roberts commented: “It is remarkable to see how in only a very few million years the view those animals’ had of their world changed from greys to the colourful world we see today.”

The project involved scientists from all across the world — from the UK as well as Denmark, Italy, Korea and Japan, where Dr Fleming has now moved to work as a postdoctoral researcher. Each of them brought their own specialities to this multidisciplinary work, providing expertise in genetics, vision, taxonomy and palaeontology.