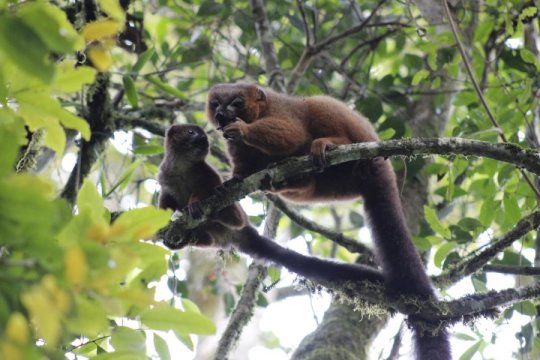 Studies have shown that when men marry and have children, they often see a decline in their androgen levels — or their levels of male sex hormones. Scientists think this could be due to the fact that androgens, such as testosterone, are commonly associated with aggression and mate competition, and could therefore impede dads’ abilities to bond with and care for their children.

Yet, research on another primate — the red-bellied lemur — suggests a different story.

Her most recent research, to be published in a special issue of the journal Physiology and Behavior, looks at how male lemurs’ hormone levels fluctuate as they care for their infants.

Much to her surprise, Tecot discovered that male lemurs’ androgen levels actually increase the more they engage in child care behaviors.

“When we think of paternal care, we tend to think lower androgens mean less aggression and more nurturing behaviors, but this research tells us that in lemurs, androgens are not inhibiting infant care, and they might actually be facilitating care,” she said.

Red-bellied lemurs live in close-knit groups of three to five — one adult female, one adult male and their offspring. The male and female reproduce no more than once a year.

Tecot and her co-author, Hunter College biological anthropologist Andrea Baden, based their findings on observations, over a two-year period, of 56 red-bellied lemurs across 13 groups.

They recorded the lemurs’ engagement in five different infant care behaviors: grooming, playing, carrying, holding and “huddling,” which entails snuggling close to one another in a group, with tails wrapped around each other’s bodies. They then tested fecal samples, gathered from the rainforest floor, for their androgen levels.

Like humans, lemurs engage in allomaternal care, meaning others besides the biological mother participate in caring for offspring. In lemur families, fathers and siblings may help out, while in humans, caregiving responsibilities may also extend to other family members, friends, teachers, babysitters and so on.

Tecot and Baden studied the caregiving behaviors of all members of the lemur groups, but they found the elevated androgen levels only in fathers.

Tecot suspects the spike is not the result of increased mating urges, since red-bellied lemurs only mate once a year, but may instead be linked instead to protective parenting.

“When you think about how you care for a child, it consists of not only nurturing behaviors, but also protective behaviors,” Tecot said. “We think you will see elevated androgen levels across a wide variety of species, including humans, when they’re guarding and protecting their infants. Then, when they perform other, more nurturing behaviors, you’ll see a negative relationship with androgen levels, like we saw with carrying.”

The male lemurs’ interactions with their infants varied widely across the groups, and even among single subjects from year to year. Future research should consider what might cause those variations, Tecot said.

“There were some dads that invested more time with their infants than the mom did, and there were other dads who maybe only performed the behaviors we measured once or twice,” she said.

“In humans, several studies have looked at how males’ androgen levels change once they’ve been paired up in a committed relationship and once they become dads,” Tecot said. “It’s hard to know if it’s because they’ve stopped the search for a mate or if it’s because of the child, but we know that, overall, dads show this decline in androgen levels. But not much research has looked at how those levels change in response to their interactions with their kids.”

The bottom line, Tecot says: Elevated androgen levels may not hinder the ability to bond with and care for infants, as expected.

“Fathers go through hormonal changes, as well as mothers, that can help facilitate care of offspring, and elevated androgen levels don’t necessarily inhibit infant care,” Tecot said. “They could actually facilitate it.”