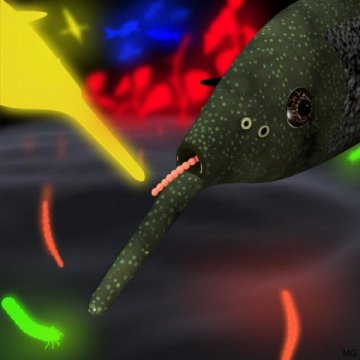 The African elephantnose fish generates weak electrical pulses to navigate its environment. This localization sense apparently shows an astonishing similarity to vision, as a study by the University of Bonn now shows. The study demonstrates that different objects have different electrical “colors.” Fish use these colors for instance to distinguish their favorite food — mosquito larvae — from other small animals or plants. The study is published in the journal Current Biology.

Elephantnose fish are nocturnal, which means they cannot rely on their eyes when hunting for prey. But they don’t need to: They carry a kind of “electric flashlight” in their tail, which they use to generate short electrical pulses up to 80 times per second. Their skin, especially their trunk-like chin, is covered with electroreceptors: small sensors with which they can measure how these pulses are reflected by the environment.

And in this they have become champions: With their electro-sense they can estimate distances, distinguish forms and materials, differentiate between dead and living objects. And more than that: Within fractions of a second, they can recognize whether mosquito larvae, their favorite food, are hiding in the gravel or sand at the bottom of their habitat. They can do this with considerable accuracy, largely ignoring the larvae of other insects.

How they do this was uncertain for a long time. Objects certainly change the intensity of the electrical signal in a characteristic way — some reduce it significantly, others reflect it better. “However, this is not enough to clearly identify prey animals,” explains Martin Gottwald of the Institute of Zoology at the University of Bonn. “For example, the signal strength also decreases as the distance increases.” But there is another characteristic of living organisms: They also modify the shape of the electric pulses. But even this signal change depends on distance, size and position.

The combination of the two signal characteristics could solve these problems. The human eye works in a similar fashion: Its retina contains receptors for red, green and blue light. Our brain then uses the “mixing ratio” to calculate the color of the object we see. And this remains largely constant, no matter how large or far away the object in question is.

However, until now there was no proof that a similar process occurs in elephantnose fish. Nevertheless, it is clear that the animals have two different types of electric receptors. One only measures the intensity of the signal, the other additionally measures its shape. “We have now been able to demonstrate that the fish uses the relation between these two measurements to identify their prey,” explains Prof. Dr. Gerhard von der Emde, who led the study.

At first, the scientists determined how intensity and shape of the localization signal behave in relation to each other depending on the type of object. “We found that this ratio is always constant for the same objects,” says von der Emde. “And this applies regardless of their distance or other environmental parameters.” “A mosquito larva therefore actually has a constant ‘electrical color’, which is clearly different from that of other larvae, plant parts, members of the same species or other fish,” adds Gottwald.

The researchers now examined the extent to which their laboratory animals used this information. They presented them with various electronic “mini chips” with a diameter of only one millimeter. Some chips produced different electrical colors; for example, they glowed like a mosquito larva or like other insect larvae. Other chips were electrically ‘colorless’, similar to a pebble.

The effect was astonishing: If the chips were colored like their favorite food, the elephantnose fish chomped down reflexively. They let themselves be fooled in this way in 70 percent of all cases, even though the fake meals did not smell at all like typical prey. Even after numerous experiments, the animals did not learn to avoid the chips. They largely spurned differently colored chips, and even completely ignored electrically colorless ones. “This may suggest that the prey color is hardwired in the brains of the fish,” speculates von der Emde.

That would make sense: The electrical properties of living beings (and thus also their color) are decisively determined by their inner structure. And this cannot be changed easily. It is therefore barely feasible for a mosquito larva to simply add camouflage.