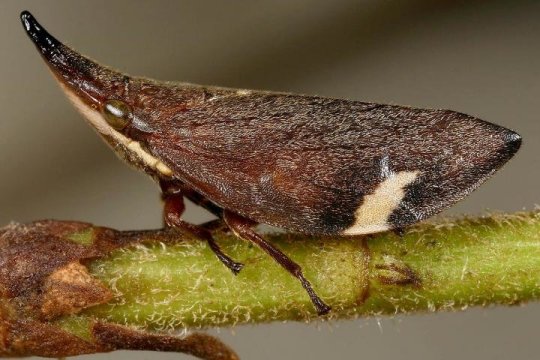 The insects known as Hemiptera are not a particularly glamorous bunch. This group includes stink bugs, bed bugs, litter bugs, scale insects and aphids. Their closest relatives are thrips, bark lice and parasitic lice. But with a massive number of species, two-thirds of which are still unknown to science, these insects together make up one of the twiggiest branches of the tree of life.

A new study published in the Proceedings of the National Academy of Sciences collected a vast amount of molecular data on these insects and used the information to help tease out their family relationships and evolutionary history. The findings — and the data, which are now publicly available — will aid future research into some of the most abundant and economically important insects on the planet, the researchers said.

“There are 120,000 known species in this group, which is maybe a third of what’s actually out there,” said Illinois Natural History Survey entomologist Christopher Dietrich, who led the study with INHS ornithologist Kevin Johnson. “To put that in perspective, that’s more than all the vertebrates combined. It’s a massively diverse group. They cover the planet. They’re in every habitat.”

Many of these insects feed on plants and animals and can be seen as pests, Dietrich said. But they also provide food for birds, insectivorous mammals, reptiles, amphibians and other predacious insects.

“Many of them form the first link of the food chain, converting plant material into protein that can be used by other animals,” he said.

Among this group are many, like aphids and planthoppers, that afflict crops; others, such as body lice and certain assassin bugs, transmit disease, Dietrich said.

To sort out these insects’ family relationships and history, the researchers analyzed nearly 2,400 protein-coding genes, their expression in the form of messenger RNA and the resulting amino-acid sequences. It was a massive effort involving collaborators in China, Europe, Japan and across the United States.

“We wanted to use newer sequencing technologies to address how all these major groups of hemipteroid insects related to each other,” Johnson said. “This is probably one of the largest data sets in existence for insects.”

The effort yielded several key findings. The most interesting of these had to do with the development of special mouthparts in some members of this group, the researchers said.

“The earliest, most primitive insects just had a pair of mandibles to chew, like ants do,” Dietrich said. “But some groups went off in a different direction.”

For those, the mandibles gradually evolved into sturdy narrow tubes that could pierce things and suck out the juices. “It was a major shift in feeding strategy,” Dietrich said. “All the insects to this point had just been chomping on things.”

The team’s molecular divergence estimate revealed that the evolution of piercing and sucking mouthparts likely occurred more than 350 million years ago. Similar mouthparts evolved independently in parasitic lice and other insects with the trait, such as mosquitoes.

“According to the fossil record, this group became the dominant group of insects on Earth in the Permian, 300 million years ago to 250 million years ago,” Dietrich said. “But at the end of the Permian they underwent a mass extinction, which was worse than the one that killed off the dinosaurs a couple hundred million years later.”

Eventually, the Hemiptera, along with the orders representing thrips and lice, were eclipsed by another group of insects, the Holometabola, which undergo complete metamorphosis and are even more diverse. Holometabola include butterflies, moths, ants, bees, flies and beetles.

Though more robust than other genetic studies of this group of insects, the new analysis has not fully resolved the relationship between the order that includes bark lice and parasitic lice, and the hemiptera and thrips, which likely belong to the same superorder, the researchers said. But the study sets the stage for future work, and an improved understanding of how some of the less charismatic, but ecologically essential, insects evolved.

The INHS is a division of the Prairie Research Institute at the University of Illinois at Urbana-Champaign.