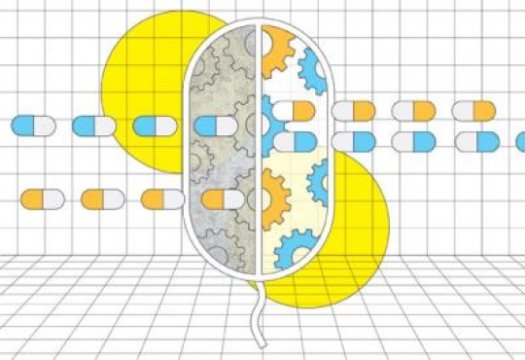 The effectiveness of antibiotics can be altered by combining them with each other, non-antibiotic drugs or even with food additives. Depending on the bacterial species, some combinations stop antibiotics from working to their full potential whilst others begin to defeat antibiotic resistance, report EMBL researchers and collaborators in Nature on July 4.

Overuse and misuse of antibiotics has led to widespread antibiotic resistance. Specific combinations of drugs can help in fighting multi-drug resistant bacterial infections, but they are largely unexplored and rarely used in clinics. That is why in the current paper, the team systematically studied the effect of antibiotics paired with each other, as well as with other drugs and food additives in different species.

Whilst many of the investigated drug combinations lessened the antibiotics’ effect, there were over 500 drug combinations which improved antibiotic outcome. A selection of these positive pairings was also tested in multi-drug resistant bacteria, isolated from infected hospital patients, and were found to improve antibiotic effects.

When vanillin — the compound that gives vanilla its distinctive taste — was paired with one particular antibiotic known as spectinomycin, it helped the antibiotic to enter bacterial cells and inhibit their growth. Spectinomycin was originally developed in the early-1960s for treating gonorrhoea but is rarely used nowadays due to the bacterial resistance that was developed against it. However, in combination with vanillin it could become clinically relevant once again and used for other disease-causing microbes. “Of the combinations tested, this was one of the most effective and promising synergies we identified,” says Ana Rita Brochado, first author on the paper and research scientist at EMBL. Pairings such as this could extend the arsenal of weapons in the war against antibiotic resistance.

Curiously, however, vanillin lessened the effect of many other types of antibiotics. The paper showed that vanillin works in a similar way to aspirin to decrease the activity of many antibiotics — although its effects in human cells have not been tested, they are most likely different.

This research is the first large-scale screening of drug combinations across different bacterial species in the lab. The compounds used have already been approved for safe use in humans, but investigations in mice and clinical studies are still required to test the effectiveness of particular drug combinations in humans. In addition to identifying novel drug combinations, the size of this investigation allowed the scientists to understand some of the general principles behind drug-drug interactions. This will allow more rational selection of drug pairs in the future and may be broadly applicable to other therapeutic areas.