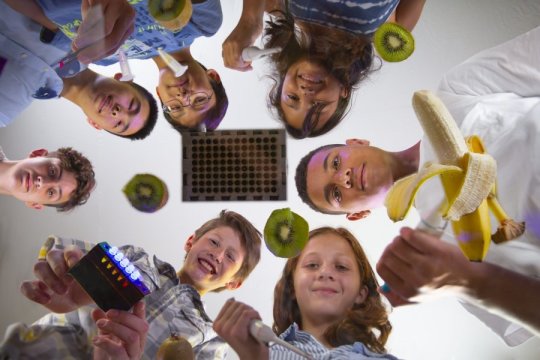 As biologists have probed deeper into the molecular and genetic underpinnings of life, K-12 schools have struggled to provide a curriculum that reflects those advances. Hands-on learning is known to be more engaging and effective for teaching science to students, but even the most basic molecular and synthetic biology experiments require equipment far beyond an average classroom’s budget, and often involve the use of bacteria and other substances that can be difficult to manage outside a controlled lab setting.

Now, a collaboration between the Wyss Institute at Harvard University, MIT, and Northwestern University has developed BioBits, new educational biology kits that use freeze-dried cell-free (FD-CF) reactions to enable students to perform a range of simple, hands-on biological experiments. The BioBits kits introduce molecular and synthetic biology concepts without the need for specialized lab equipment, at a fraction of the cost of current standard experimental designs. The kits are described in two papers published in Science Advances.

“The main motivation in developing these kits was to give students fun activities that allow them to actually see, smell, and touch the outcomes of the biological reactions they’re doing at the molecular level,” said Ally Huang, a co-first author on both papers who is an MIT graduate student in the lab of Wyss Founding Core Faculty member Jim Collins, Ph.D. “My hope is that they will inspire more kids to consider a career in STEM [science, technology, engineering, and math] and, more generally, give all students a basic understanding of how biology works, because they may one day have to make personal or policy decisions based on modern science.”

Synthetic and molecular biology frequently make use of the cellular machinery found in E. coli bacteria to produce a desired protein. But this system requires that the bacteria be kept alive and contained for an extended period of time, and involves several complicated preparation and processing steps. The FD-CF reactions pioneered in Collins’ lab for molecular manufacturing, when combined with innovations from the lab of Michael Jewett, Ph.D. at Northwestern University, offer a solution to this problem by removing bacteria from the equation altogether.

READ  Africa Is Splitting In Two At An Alarming Rate (Video)

“You can think of it like opening the hood of a car and taking the engine out: we’ve taken the ‘engine’ that drives protein production out of a bacterial cell and given it the fuel it needs, including ribosomes and amino acids, to create proteins from DNA outside of the bacteria itself,” explained Jewett, who is the Charles Deering McCormick Professor of Teaching Excellence at Northwestern University’s McCormick School of Engineering and co-director of Northwestern’s Center for Synthetic Biology, and co-corresponding author of both papers. This collection of molecular machinery is then freeze-dried into pellets so that it becomes shelf-stable at room temperature. To initiate the transcription of DNA into RNA and the translation of that RNA into a protein, a student just needs to add the desired DNA and water to the freeze-dried pellets.

The researchers designed a range of molecular experiments that can be performed using this system, and coupled each of them to a signal that the students can easily detect with their sense of sight, smell, or touch. The first, called BioBits Bright, contains six different freeze-dried DNA templates that each encode a protein that fluoresces a different color when illuminated with blue light. To produce the proteins, students simply add these DNA templates and water to the FD-CF machinery and put the reactions in an inexpensive incubator (~$30) for several hours, and then view them with a blue light illuminator (~$15). The students can also design their own experiments to produce a desired collection of colors that they can then arrange into a visual image, a bit like using a Light Brite?. “Challenging the students to build their own in vitro synthetic programs also allows educators to start to talk about how synthetic biologists might control biology to make important products, such as medicines or chemicals,” explained Jessica Stark, an NSF Graduate Research Fellow in the Jewett lab at Northwestern University who is co-first author on both papers.

An expansion of the BioBits Bright kit, called BioBits Explorer, includes experiments that engage the senses of smell and touch and allow students to probe their environment using designer synthetic biosensors. In the first experiment, the FD-CF reaction pellets contain a gene that drives the conversion of isoamyl alcohol to isoamyl acetate, a compound that produces a strong banana odor. In the second experiment, the FD-CF reactions contain a gene coding for the enzyme sortase, which recognizes and links specific segments of proteins in a liquid solution together to form a squishy, semi-solid hydrogel, which the students can touch and manipulate. The third module uses another Wyss technology, the toehold switch sensor, to identify DNA extracted from a banana or a kiwi. The sensors are hairpin-shaped RNA molecules designed such that when they bind to a “trigger” RNA, they spring open and reveal a genetic sequence that produces a fluorescent protein. When fruit DNA is added to the sensor-containing FD-CF pellets, only the sensors that are designed to open in the presence of each fruit’s RNA will produce the fluorescent protein.

The researchers tested their BioBits kits in the Chicago Public School system, and demonstrated that students and teachers were able to perform the experiments in the kits with the same success as trained synthetic biology researchers. In addition to refining the kits’ design so that they can one day provide them to classrooms around the world, the authors hope to create an open-source online database where teachers and students can share their results and ideas for ways to modify the kits to explore different biological questions.

“Synthetic biology is going to be one of the defining technologies of the century, and yet it has been challenging to teach the fundamental concepts of the field in K-12 classrooms given that such efforts often require expensive, complicated equipment,” said Collins, who is a co-corresponding author of both papers and also the Termeer Professor of Medical Engineering & Science at MIT. “We show that it is possible to use freeze-dried, cell-free extracts along with freeze-dried synthetic biology components to conduct innovative educational experiments in classrooms and other low-resource settings. The BioBits kits enable us to expose young kids, older kids, and even adults to the wonders of synthetic biology and, as a result, are poised to transform science education and society.

“All scientists are passionate about what they do, and we are frustrated by the difficulty our educational system has had in inciting a similar level of passion in young people. This BioBits project demonstrates the kind of out-of-the-box thinking and refusal to accept the status quo that we value and cultivate at the Wyss Institute, and we all hope it will stimulate young people to be intrigued by science,” said Wyss Institute Founding Director Donald Ingber, M.D., Ph.D., who is also the Judah Folkman Professor of Vascular Biology at Harvard Medical School (HMS) and the Vascular Biology Program at Boston Children’s Hospital, as well as Professor of Bioengineering at Harvard’s John A. Paulson School of Engineering and Applied Sciences (SEAS). “It’s exciting to see this project move forward and become available to biology classrooms worldwide and, hopefully some of these students will pursue a path in science because of their experience.”