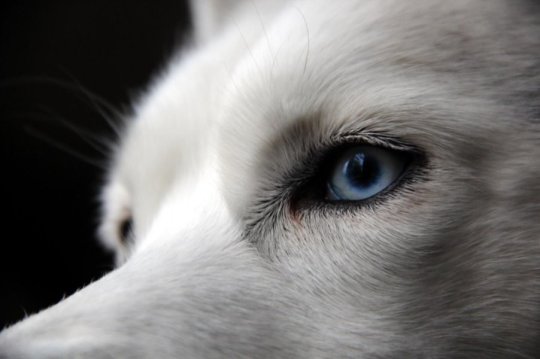 DNA testing of more than 6,000 dogs has revealed that a duplication on canine chromosome 18 is strongly associated with blue eyes in Siberian Huskies, according to a study published October 4, 2018, in the open-access journal PLOS Genetics by Adam Boyko and Aaron Sams of Embark Veterinary, Inc., and colleagues. Embark is a dog DNA startup company headquartered in Boston, MA, and Ithaca, NY, and research partner of the Cornell University College of Veterinary Medicine. According to the authors, this represents the first consumer genomics study ever conducted in a non-human model and the largest canine genome-wide association study to date.

Consumer genomics enables genetic discovery on an unprecedented scale by linking very large databases of genomic data with phenotype information voluntarily submitted via web-based surveys. But the promise of consumer genomic data is not limited to human research. Genomic tools for dogs are readily available but the genetic underpinnings of many important traits remain undiscovered. Although two genetic variants are known to underlie blue eye color in some dogs, these do not explain the trait in some other dogs, like Siberian Huskies.

To address this gap in knowledge, Boyko, Sams and colleagues used a diverse panel of 6,070 genetically tested dogs with owners that contributed phenotype data via web-based surveys and photo uploads. They found that a 98.6-kilobase duplication on chromosome 18 near the ALX4 gene, which plays an important role in mammalian eye development, was strongly associated with variation in blue eye color, primarily in Siberian Huskies but also in non-merle Australian Shepherds. One copy of the variant was enough to cause blue eyes or heterochromia (blue and brown eyes), although some dogs with the variant did not have blue eyes, so other genetic or environmental factors are still involved. Future studies of the functional mechanism underlying this association may lead to the discovery of a novel pathway by which blue eyes develop in mammals. From a broader perspective, the results underscore the power of consumer data-driven discovery in non-human species, especially dogs, where there is intense owner interest in the personal genomic information of their pets, a high level of engagement with web-based surveys, and an underlying genetic architecture ideal for mapping studies.

Aaron J. Sams adds: “Using genetic data from the pets of our customers, combined with eye colors reported by customers for those same animals, we have discovered a genetic duplication that is strongly associated with blue eye color. This study demonstrates the power of the approach that Embark is taking towards improving canine health. In a single year, we collected enough data to conduct the largest canine study of its kind. Embark is currently pursuing similar research projects in a range of morphological and health-related traits and we hope to continue to use our platform to move canine genetics and health forward in a very real way.”