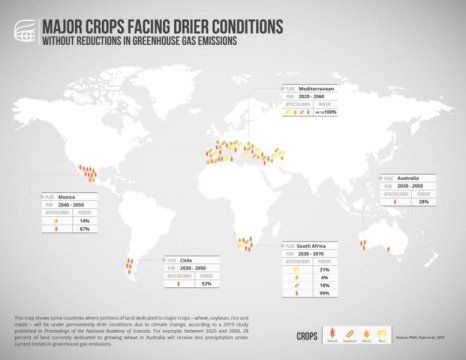 Even if humans radically reduce greenhouse gas emissions soon, important crop-growing regions of the world can expect changes to rainfall patterns by 2040. In fact, some regions are already experiencing new climatic regimes compared with just a generation ago. The study, published March 11 in Proceedings of the National Academy of Sciences, warns that up to 14 percent of land dedicated to wheat, maize, rice and soybean will be drier, while up to 31 percent will be wetter.

The study uses four emissions scenarios from low to high to predict time of emergence (TOE) of permanent precipitation changes, meaning the year by which precipitation changes remain permanently outside their historical variation in a specific location. The research shows that quick action on emissions — in line with 2015’s Paris Agreement — would push TOE projections deeper into the future or reduce the size of affected areas.

Drier regions include Southwestern Australia, Southern Africa, southwestern South America, and the Mediterranean, according to the study. Wheat cropland in Central Mexico is also headed for a drier future. Wetter areas include Canada, Russia, India and the Eastern United States.

The four crops in the study represent about 40 percent of global caloric intake and the authors say that, regardless of how much mitigation is achieved, all regions — both wetter and drier — need to invest in adaptation, and do so urgently in areas expected to see major changes in the next couple of decades. However, in the scenarios with low greenhouse gas emissions, most regions have two-three decades more to adapt than under high-emission scenarios.

“These are definitely countries that will need to think rather quickly what they’d like to do with their wheat production,” said Maisa Rojas, the study’s lead author and climatologist at Universidad de Chile. Colleagues at the International Center for Tropical Agriculture, the University of Leeds, Chile’s Center for Climate and Resilience Research, and Pontificia Universidad Católica de Chile (UC) co-authored the study.

“What we’re predicting are probably conservative years for time of emergence,” said Rojas. “Detectable precipitation changes are of course not only important for agriculture, but for water resource management more in general, so our results are relevant for other sectors as well.”

One stunning aspect of the study is how quickly global precipitation is changing. The baseline for comparison is 20 years spanning 1986-2005. A handful of regions already have crossed that “historical” average into an entirely new rainfall regime, including Russia, Norway, Canada and the parts of the East Coast of the United States. The study projects that up to 36 percent of all land area will be wetter or drier under a high-emission scenario.

“Farmers growing crops in those areas are going to experience significantly different conditions than what they are used to,” said Julian Ramirez-Villegas, a scientist with the International Center for Tropical Agriculture (CIAT) and the CGIAR Research Program on Climate Change, Agriculture and Food Security (CCAFS). “They’re going to be completely outside their normal historical environments and many farmers are already struggling with historic variability.”

Areas not reflected in the study are likely to have precipitation changes as well, said Rojas. But because natural variation in those areas is high, extreme change is needed before researchers can detect their times of emergence.

“Other studies have examined time of emergence in global temperature and precipitation,” said Fabrice Lambert, a UC professor and co-author. “The interesting thing about this study is that we overlay the climatic results with spatial cropland distribution and growing seasons to show which agricultural production regions will be impacted by precipitation changes, and how much time they have to prepare.”

The world’s most populous countries — China and India — are among those that will have much wetter fields for the four crops included in the study, under any emission scenario. Percentage of cropland that will extend into high double-digits. Asia’s other big rice producers, including Japan, Korea and the Philippines will have TOEs for increased rainfall.

More precipitation may mean higher production, but when coupled with rising sea levels, higher temperatures and increased potential for flooding, higher production is not assured, said the authors.

“The precise nature of the changes is impossible to predict,” said Andy Challinor, a co-author and Professor at the Priestley International Centre for Climate at the University of Leeds. “What this study tells us is that adaptation needs to be agile. For the first time, we can tell what changes to be ready for — and when they are expected — in our major crop-growing regions. Prior to this study, the rainfall changes experienced by crops were thought to be so unpredictable that no real advice could be given.”