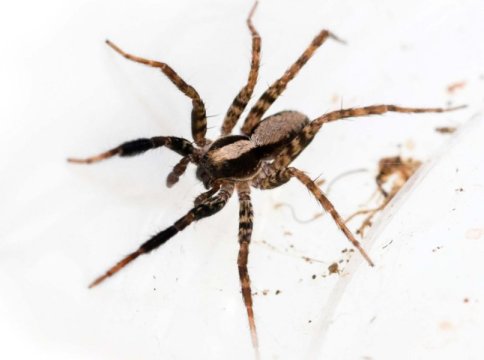 Now biologists at the University of Cincinnati are studying whether that ability translates to the more humdrum-looking wolf spiders that are muted browns and tans instead of electric blue, fiery orange and stoplight red.

UC biology professor George Uetz and his students presented their work in June at the American Arachnological Society meeting at the University of Michigan.

“The assumption was wolf spiders don’t pay attention to color. But we found that isn’t really true,” Uetz said. “We need to look more closely at the neurobiology of their eyes. We need to understand what their retinas do.”

Like most spiders, wolf spiders have four pairs of eyes, some of which have a reflective lens called a tapetum that sparkles in bright light. If you are an arachnophobe and want a reason never to go in your backyard again, try shining an LED light there some evening and see all the little predators staring back.

Wolf spiders are quickly becoming a model system for study because of labs such as UC’s. Uetz has been examining spider behavior, vision and personality for most of his career. Every study reveals there is more to these creatures than meets their eight eyes.

“That means they’re basically colorblind. But they’re sensitive to light in the green wavelength,” Uetz said.

In one study presented in June, UC researchers looked at how spiders reacted to a video of courting spiders in which they manipulated the background color, contrast and intensity. Would they react to the courting spider in monochrome? What if the contrast were exaggerated?

Uetz created videos featuring a digital spider and background, both of which could be manipulated to adjust the color and contrast. They played the video for female spiders as well as for male spiders called “eavesdroppers” for their habit of lurking in the background while learning how to mimic other male spiders’ courting displays. They found that female spiders were more likely to respond to videos of males that contrasted sharply from their background. Female spiders also responded better to the color and monochrome than the grayscale version, suggesting color makes a difference to spiders.

“What we found is that for female spiders, intensity matters more than color. But for male eavesdroppers, color matters, too. That is the odd finding. We didn’t expect that at all,” Uetz said.

One surprising finding was that spider eyesight seems to adapt to the changing seasons.

“That makes a lot of sense because when you go out in the early season when the spiders first come out, there are no leaves on the trees so there is broad spectrum light,” Uetz said. “But as the seasons change, leaves come out and everything turns green. Spiders have to be able to see the contrast against a lot of color backgrounds.”

UC’s spider lab keeps about 1,200 wolf spiders (virtually all of them, researchers assure visitors, are accounted for). Students collect juvenile spiders from the same populations of wild spiders living in forests near UC.

In another study, UC postdoctoral researcher Alex Sweger examined the way male wolf spiders use vibrations to woo females. Spiders don’t have ears but can “hear” with tiny sensory organs on their legs that pick up the faint vibrations of prey. Male spiders use a special rasping organ on their pedipalps to produce vibrations that drum the ground, rattling leaves or soil, as part of their ritual mating dance.

Sweger used a laser Doppler vibrometer to measure the spider’s vibrations and reproduce them with a device called a piezoelectric disc bender.

“It’s very similar to the vibrations made by an actual spider. We calibrate the device and attach it to a leaf and see how the female spider responds,” he said.

Sweger suspected that summer rains are the bane of these spider drummers. He found that males tried to woo females regardless of the weather. But when the ground is wet, they rely more on their visual cues — waving their forelegs in a dance that only female wolf spiders might appreciate.

“They shift to visual behaviors over vibrations on wet leaves, suggesting they are flexible in using different communication modes to suit the conditions,” Sweger said.

Even so, males have far less mating success under wet conditions.

“Their breeding season isn’t very long. Males have a lot of pressure to mate with as many females as possible to increase their genetic success,” Sweger said. “So if you can overcome a hurdle like rain rather than wait for ideal conditions, it benefits you.”

For another study, UC biology student Trinity Walls examined whether juvenile spiders that were classified as shy or bold would maintain that behavior later in life. They did.

To classify her subjects as bold or shy, Walls poked at juvenile spiders with a pair of forceps that simulated a bird’s beak. Shy spiders typically froze in place, relying on camouflage for long periods after the scare, while the bold spiders resumed their foraging or exploration much more quickly. She repeated the scare tactic when the juveniles were older and compared her results.

“There are pros and cons to each behavior,” Uetz said. “Bold spiders face more risks from predators drawn to movement. But by moving, they’re more likely to find prey or mates.”

Student Walls came to UC because of the biology department’s spider lab. She has been fascinated by them her entire life, she said.

UC student Olivia Bauer-Nilsen examined whether a bacterial infection common to spiders affected the mating behavior of female wolf spiders. Bauer-Nilsen suspected that the immune response from the infection would make the spider too weak or fatigued to mate. Instead, she found the infection had no discernible effect. She presented a poster on the study at the conference.

“It was my first poster. A lot of people say don’t talk to me about spiders ever again. But my family and close friends are not averse to spiders. They’re excited that I’m excited,” she said.

Uetz said even he wasn’t always the fan of spiders he is today.

“I was terrified of spiders before college. Everyone seems to react that way. Spiders are the No. 1 most-feared species on the planet now,” Uetz said. “It’s completely unjustified.”

Uetz said he learned to appreciate spiders in his first biology class when he took a close look.

“When you look at these animals under a microscope, you see them in a completely different way,” he said. “These animals are alien but no less interesting.”