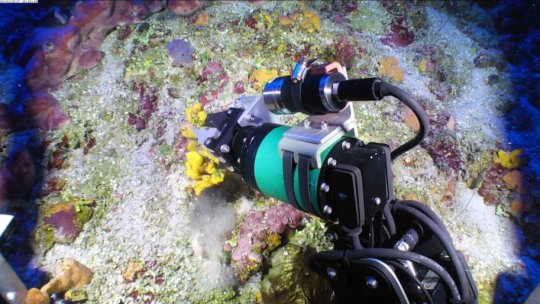 Drug resistance to antibiotics is on the rise and there is an urgent need to develop new drugs to treat infectious diseases that are a major threat to human health globally. Researchers from Florida Atlantic University’s Harbor Branch Oceanographic Institute may have a solution to this problem using sea sponges collected from the ocean depths.

For more than 30 years, FAU Harbor Branch scientists have accumulated sea sponges and other macro-organisms from the east coast of the United States, Gulf of Mexico, Caribbean as well as European and African deep waters using manned submersibles and other methods. Many of these specimens contain large populations of microbes, some of which can be grown under laboratory conditions. The Harbor Branch Marine Microbial Collection is home to about 19,000 of these diverse micro-organisms, with 11,000 gathered from ocean depths greater than 45 meters. The collection contains more than 1,000 strains of actinobacteria, one of the most prolific microbial groups for the production of natural products. Actinomycetes produce more than half of the currently used antibiotic drugs.

In a new study published in the journal Frontiers in Microbiology, FAU Harbor Branch scientists examined 50 actinobacteria strains from these marine samples to look for new anti-infective agents. All of these strains were cultivated from marine sponges. Because they were derived from various sponge hosts collected from environmentally and geographically diverse locations, many of them can be considered to be rare actinobacteria.

Researchers screened the samples’ metabolites against a panel of bacterial pathogens that are common causes of healthcare-associated infections and are listed among the most severe threats to human health. The panel of pathogens included Candida albicans, Staphylococcus aureus, methicillin-resistant S. aureus (MRSA) and C. difficile, a cause of life-threatening diarrhea that is responsible for 453,000 cases and 29,000 deaths each year in the U.S. alone.

Results from the study reveal that more than half of the strains showed anti-microbial activity in at least one assay, indicating the potential of this group of actinobacteria for the production of antimicrobial natural products. Among them, several strains were identified for their potent antifungal activity, for anti-MRSA activity, and for both antifungal and antibacterial activities. A key finding from the study was the identification of a strain that produced metabolites that are more potent than the bacterial antibiotic, vancomycin, against C. difficile.

“We have found that deep-sea microorganisms, especially actinomycetes, are an attractive, untapped source for the discovery of anti-infective agents,” said Wang. “In addition, the diversity of microbes we used in this study and their origins are quite novel. Most exciting is the demonstration of the importance of using an elicitor in this type of study as 50 percent of the strains showed the effect of the elicitor on antimicrobial activity.”

Both the U.S. Centers for Disease Control and Prevention (CDC) and the World Health Organization (WHO) have issued lists of priority pathogens. In 2017, the CDC listed 18 drug-resistant bacteria threats to the U.S. For the first time, WHO listed 12 families of bacteria as the greatest threat to human health.

“Marine natural products represent an increasingly attractive source of new anti-infective agents,” said McCarthy. “Searching for new taxa as new sources is critical when we are looking for new agents, but equally important is finding ways to exploit the full genetic potential of these microbes. We are working to identify additional new chemicals and test their activity and mode of action with the ultimate goal to identify potent drug leads from marine microbes.”

The researchers are in the process of purification and structural identification of additional bioactive chemicals and have determined the genome sequences of three of the strains they studied. They are currently analyzing and investigating the potential biosynthetic gene clusters and gene-compound relationships.

Infectious diseases remain a major threat to human health causing millions of deaths worldwide, especially in medically less-developed countries and regions. In 2016, there were an estimated 1.2 million tuberculous deaths, 1.03 million HIV/AIDS deaths, and 719,600 malaria deaths. This situation is significantly worsened by the prevalence of multi-drug resistance. While therapeutics such as vancomycin, metronidazole, fidaxomicin or nitazoxanide are available, because of drug resistance or toxicity to gut microbiome, new drugs, especially those with narrow spectrum, are desperately needed.