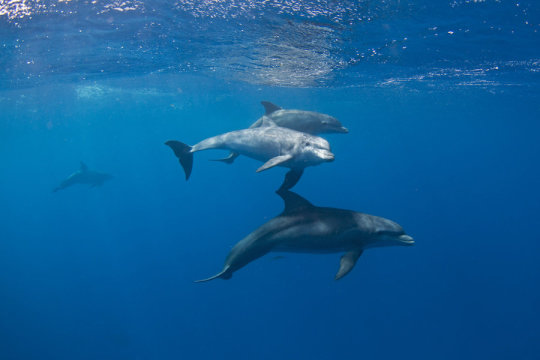 Vanderbilt University paleontologists are looking into the evolutionary origins of the whistles and squeaks that dolphins and porpoises make — part of the rare echolocation ability that allows them to effectively navigate their dark environment.

The team, one of the first in the world to examine the ability’s origins, used a small CT scanner to look inside a 30-million-year-old ear bone fossil from a specimen resembling Olympicetus avitus. This member of the toothed whale family, in a branch that died out before modern dolphins and porpoises appeared, lived in what is now the state of Washington. The CT scan revealed cochlear coiling with more turns than in animals with echolocation, indicating hearing more similar to the cloven-hoofed, terrestrial mammals dolphins came from than the sleek sea creatures they are today.

“The simple theory is that there was one origin for echolocation in dolphins, and we’d find it in their 30-million-year-old ancestor,” said Rachel A. Racicot, who completed the research as a visiting scholar at Vanderbilt. “Now, we believe it didn’t evolve just once in this lineage, but more than once and in more than one lineage — at least in xenorophids, which are extinct, and somewhere along the line to the Odontoceti crown group that still survives.”

Because echolocation is useful for navigating dark waters, natural selection likely came into play with its development in the branch that survived, she said. The findings appear May 15 in The Royal Society journal Biology Letters.

Racicot will join Vanderbilt’s Earth and Environmental Sciences Department after spending a year working in Germany. Her co-author, Assistant Professor of Earth and Environmental Sciences Simon A.F. Darroch, installed the CT scanner, which works the same way as those used in medicine and allows for internal examination of fossils without damaging them.

Learning echolocation’s origins also can help preserve modern creatures that use it, Darroch said, by understanding how they’re perceiving sound from ship engines, oil drills and other machinery. Confusion over those sounds may be causing mass stranding events, and solving the mystery could lead to methods of discouraging species such as the vaquita, a small porpoise on the brink of extinction in the Gulf of California, away from boats and nets.

“If we develop correlates for the shapes of the inner ear and how that corresponds to hearing frequencies, we can extrapolate those methods without capturing animals and bombarding them with sounds that don’t work,” Darroch said.

First, according to Racicot and Darroch, paleontologists will have to find and scan a much larger sampling of all the toothed whale group’s ancestors and those of rare modern species.

Other authors were Robert W. Boessenecker of the College of Charleston, who identified, described and prepared the specimen, and Jonathan H. Geisler of the New York Institute of Technology, who coded characters and explored its evolutionary tree.

This work was supported by Vanderbilt University and National Science Foundation grant EAR 1349607.