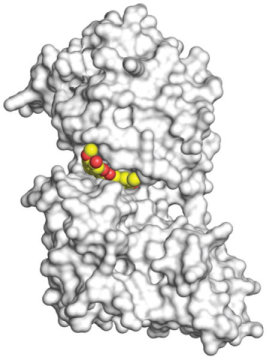 Through x-ray crystallography and kinase-inhibitor specificity profiling, University of California San Diego School of Medicine researchers, in collaboration with researchers at Peking University and Zhejiang University, reveal that curcumin, a natural occurring chemical compound found in the spice turmeric, binds to the kinase enzyme dual-specificity tyrosine-regulated kinase 2 (DYRK2) at the atomic level. This previously unreported biochemical interaction of curcumin leads to inhibition of DYRK2 that impairs cell proliferation and reduces cancer burden.

But before turning to curcumin or turmeric supplements, Sourav Banerjee, PhD, UC San Diego School of Medicine postdoctoral scholar, cautions that curcumin alone may not be the answer.

“In general, curcumin is expelled from the body quite fast,” said Banerjee. “For curcumin to be an effective drug, it needs to be modified to enter the blood stream and stay in the body long enough to target the cancer. Owing to various chemical drawbacks, curcumin on its own may not be sufficient to completely reverse cancer in human patients.”

Writing in the July 9 issue of the Proceedings of the National Academy of Sciences, Banerjee and colleagues report that curcumin binds to and inhibits DYRK2 leading to the impediment of the proteasome — the cellular protein machinery that destroys unneeded or damaged proteins in cells — which in turn reduces cancer in mice.

“Although curcumin has been studied for more than 250 years and its anti-cancer properties have been previously reported, no other group has reported a co-crystal structure of curcumin bound to a protein kinase target until now,” said Banerjee, first author on the study. “Because of their work on the crystallography, our collaborators at Peking University, Chenggong Ji and Junyu Xiao, helped us to visualize the interaction between curcumin and DYRK2.”

“The enzyme kinases IKK and GSK3 were thought to be the prime curcumin-targets that lead to anti-cancer effect but the co-crystal structure of curcumin with DYRK2 along with a 140-panel kinase inhibitor profiling reveal that curcumin binds strongly to the active site of DYRK2, inhibiting it at a level that is 500 times more potent than IKK or GSK3.”

Using biochemical, mouse cancer models and cellular models the team found that curcumin is a selective inhibitor of DYRK2 and that this novel molecular target has promising anticancer potential for not only chemo-sensitive but also proteasome inhibitor resistant/adapted cancers.

“Our results reveal an unexpected role of curcumin in DYRK2-proteasome inhibition and provide a proof-of-concept that pharmacological manipulation of proteasome regulators may offer new opportunities for hard-to-treat triple-negative breast cancer and multiple myeloma treatment,” said Dixon, who was co-senior author with Zhejiang University’s Xing Guo, PhD, on the paper. “Our primary focus is to develop a chemical compound that can target DYRK2 in patients with these cancers.”

DYRK2 depletion impairs proteasome activity and exhibits slower cancer proliferation rates and significantly reduced tumor burden in mouse models. In combination with the FDA-approved multiple myeloma drug, carfilzomib, curcumin induced a much higher cancer cell death while normal non-cancerous cells were less affected. This suggest that targeting proteasome regulators (such as DYRK2) in combination with proteasome inhibitors may be a promising approach of anticancer therapy with less side-effects but further work is needed, said Banerjee.

Materials provided by University of California – San Diego. Original written by Yadira Galindo. Note: Content may be edited for style and length.