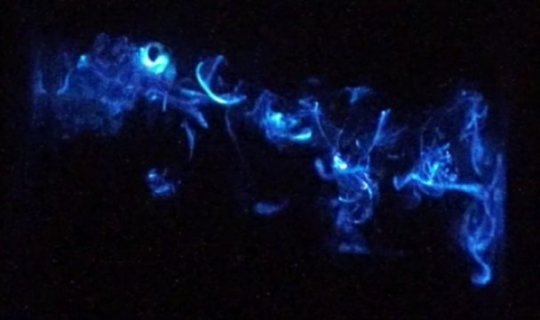 Evolution is a rich and dynamic process. Species respond to pressures in a variety of ways, most of which reduce to finding food, avoiding becoming someone else’s food and attracting a mate. To solve that last one the animal kingdom is replete with fantastic, bizarre and mesmerizing adaptions. The bioluminescent courtship displays of ostracods may encapsulate all three.

Ostracods are peculiar animals. No larger than a sesame seed, these crustaceans have a clam-like shell and often lack gills. Like many sea creatures, a number of ostracods take advantage of bioluminescence to avoid predation and to attract mates. It is this latter use that attracted the attention of UC Santa Barbara doctoral student Nicholai Hensley in his search to better understand the interplay between biochemistry and evolutionary change.

To create their entrancing light displays, cypridinid ostracods expel a bit of mucus injected with an enzyme and a reactant, and then swim away from the glowing orb to repeat the act again. The result is a trail of fading ellipses, or will-o’-the-wisps hanging in the water column. And the length of each of these pulses is a major component of the courtship display. Some are quick like an old-fashioned flashbulb, said Hensley, while others linger in the water.

In a classic scenario, you’d expect to find a clear correlation between how long the flash lasts and the structure of the enzyme responsible for it, said Hensley. “And that’s true for some of the species, but it’s not true for all of the species.”

Instead, Hensley and his colleagues discovered that two mechanisms influence the duration of the light pulses. An animal using enzymes with a slower reaction rate will create a longer glow, but so too will one that spits out a greater amount of reactant, which takes the enzymes longer to exhaust. Both of these are at play in different combinations across the different species.

“That was one of the surprising results we got out of our paper,” said Hensley. The team’s findings appear in the Royal Society journal Proceedings B.

This discovery was due in part to the group of animals Hensley chose to study. Because ostracods spit out their light, Hensley could study the chemistry separately from the behavior of the animal itself. Contrast this with fireflies, in which the reaction happens inside their bodies. As a result, it’s under the animal’s behavioral control the whole time, explained Todd Oakley, a professor in UC Santa Barbara’s department of ecology, evolution and marine biology, and Hensley’s advisor and coauthor. “We can get at more in terms of the specifics of the chemistry because it’s outside the body,” he said.

The relationship between the two mechanisms may even influence how different species evolve in the future. For instance, if one species tends toward ever longer pulses, they may run up against the maximum of what the enzyme is capable of. Without the ability to make the enzyme more efficient, this species may evolve to use more of the chemical per pulse to achieve a longer flash.

Hensley is currently investigating how certain changes in the enzyme affect its ability to produce light: make it work faster, slower, or not at all. He also hopes to reconstruct the group’s ancestral enzyme and test its functions to see how it may have differed from the ones the animals use today.

At the same time, the team is turning an eye toward behavioral aspects of the ostracods’ mating display. For instance, they’d like to determine how much pulse length matters to female ostracods, compared to aspects like spacing or direction. Males of certain species synchronize their displays when surrounded by other males, creating a mesmerizing underwater light show. Hensley plans to take a closer look at this behavior in collaboration with colleagues at University of Kansas.

“Just describing how such diversity arises is our goal,” said Hensley, “and this may give us insight into how it actually occurs.”

Materials provided by University of California – Santa Barbara. Original written by Harrison Tasoff. Note: Content may be edited for style and length.