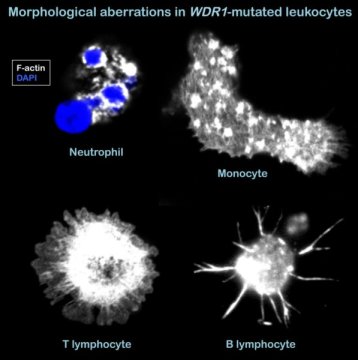 In order to move, a body needs a strong scaffold. This is not only true on a macroscopic level, where animals rely on skeletons to support their muscles. It is also true on a cellular level: the cytoskeleton composed of actin filaments is crucial for every active movement of a cell. By rearranging these filaments, cells can stretch and wander in every direction, squeeze into the smallest gaps or wrap themselves around an object. Those processes are particularly important for the cells of the immune system, which are the most motile cells of the human body in order to fight against infectious agents. Defects of the cytoskeleton thus can have detrimental effects on the immune response and thereby on the ability of the organism to control infections.

In their most recent study, scientists from the Ludwig Boltzmann Institute for Rare and Undiagnosed Diseases (LBI-RUD) and the CeMM Research Center for Molecular Medicine of the Austrian Academy of Sciences in cooperation with the University of Toulouse III, and INSERM, found that a rare genetic defect, characterized by a malfunctioning of the immune system, affects the ability of lymphocytes — the most important cells of the adaptive immunity — to rearrange their actin cytoskeleton. The study, published in the Journal of Allergy and Clinical Immunology was conducted in collaboration with clinicians from Izmir and Ankara and specialists of lymphocyte biology from the University of Vienna and the University of Rotterdam.

The gene defect was found in six patients who presented with severe infections of the lung, skin and oral mucosa. Genetic analyses of their genomes revealed mutations in a gene for a protein called WDR1, an important factor for the turn-over of actin filaments and thereby the dynamic remodeling of the cytoskeleton. It was recently shown that the innate arm of the immune system is affected by WDR1 mutations — the impact on cells of the adaptive immunity, however, was hitherto unknown. Through a series of extensive analyses, the researchers found that WDR1 deficiency leads to aberrant T-cell activation and B-cell development.

“We were able to show that T lymphocytes, although they appeared to develop normally in the patients, accumulated atypical actin structures. However, even more severe were the observed abnormalities in B lymphocytes” says Laurène Pfajfer, PhD student at LBI-RUD and shared first author of the study.

“Only few B cells were observed in the blood, and their progenitors in the bone marrow were also rare,” Visiting Key Researcher at LBI-RUD and shared senior author Loïc Dupré, specifies. “And the few B cells we found showed a whole range of abnormalities, including reduced clonal diversity, abnormal spreading and increased apoptosis upon B-cell receptor stimulation.”

“Our report expands the phenotypic spectrum of WDR1 deficiency, which comprises marked defects of both innate and adaptive immunity and illustrates the tight connection between immune system and uncontrolled inflammation which results in disease,” summarizes Kaan Boztug, Director of LBI-RUD and shared senior author. “The results allowed us to gain new insights into the key role of actin cytoskeletal dynamics in supporting immune cell function. This study is another example for the value of research on rare diseases — not only for the few affected patients, but for a more global and fundamental understanding of human biology. Furthermore the elucidation of the fine mechanisms leading to such diseases provides unique insights for the development of precision medicine.

Materials provided by CeMM Research Center for Molecular Medicine of the Austrian Academy of Sciences. Note: Content may be edited for style and length.