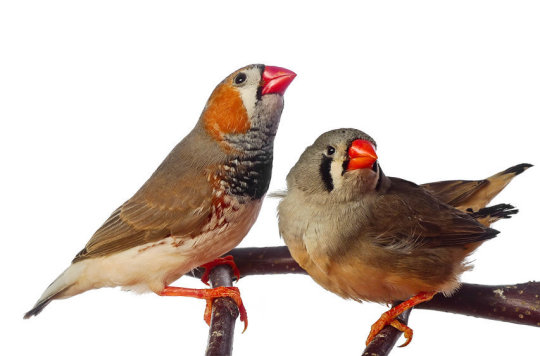 Birds create songs by moving muscles in their vocal organs to vibrate air passing through their tissues. While previous research reported that each of the different muscles controls one acoustic feature, new research shows that these muscles act in concert to create sound.

An international team of researchers describes how zebra finches produce songs in the journal Chaos, from AIP Publishing. Using electromyographic (EMG) signals, researchers tracked the activity of one of the main muscles involved in creating sound, the syringealis ventralis (vS) muscle. They then used the data from this muscle to create a synthetic zebra finch song.

“The activity of this muscle provided us information on gating, when the sound starts or ends,” said Juan Döppler, one of the researchers and a doctoral student at the University of Buenos Aires. “What’s interesting is that when the bird is asleep, despite lacking the airflow necessary to produce sound, this muscle also activates and shows electrical activity, similar to the activity it shows while singing.”

Using EMG data, they identified phonating intervals with a success rate above 70 percent. The team developed a set of criteria to accurately predict sound production intervals in a set of data from five different birds. The criteria performed particularly well in the short, simple syllables, when the vS is mostly silent during the creation of sound. For more complex syllables, it was clear that incorporating the activity of other syringeal muscles that impact the start and stop of sound in a zebra finch’s song would improve their gating prediction.

“So in the big picture we expect to soon be able to use this tools to determine when birds are dreaming about singing and to actually listen what songs they are ‘singing’ when asleep,” Döppler said.