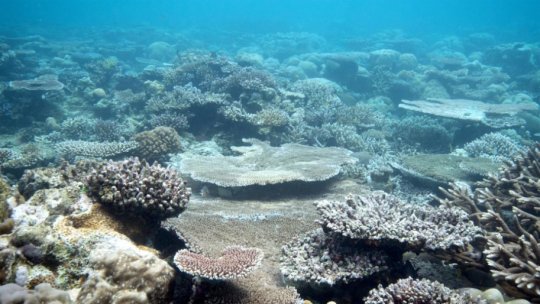 Similar to forests on land, the most important source of energy for tropical shallow water coral reefs is light. Photosynthetic algae, called zooxanthellae, live within the tissues of reef-building corals and provide them with oxygen and the products of photosynthesis, including glucose and amino acids. The corals, in turn, use these products as the energy source for building calcium carbonate skeletons and growing more living tissue. Other ecologically important reef organisms, such as macroalgae and turf algae, depend on light for growth and reproduction as well, making light the driving force behind the growth and overall productivity of coral reef ecosystems.

For this reason, coral reef scientists are interested in determining the relationship between primary productivity and varying light conditions. In a paper published last month by two BIOS reef ecologists in the scientific journal PLoS ONE, postdoctoral researcher Yvonne Sawall and her advisor, associate scientist Eric Hochberg, present evidence that reefs optimize their photosynthetic capacities to prevailing environmental conditions, such as general availability of light, nutrients, carbon dioxide, and temperature.

In the past, measurements of photosynthesis have typically been made over a short time period of minutes to hours. The results of these measurements, called instantaneous P-E curves, graph the relationship between primary productivity and the amount of light entering the system (also called irradiance). Over short time periods, these graphs produce a classic relationship where productivity increases linearly to a point (called the saturation point) before leveling off, meaning that corals can only increase their photosynthesis up to a certain light level, after which no further increase is observed.

However, Sawall and Hochberg think that longer-term measurements are required in order to accurately measure reef productivity.

“Traditional P-E curves ignore the fact that sky conditions and light availability change over the course of a single day, as well as across the seasons and in different locations around the world,” Hochberg said. “Ultimately, these limitations impact how we characterize a reef’s long-term capacity for primary productivity.”

Hochberg pointed out that terrestrial scientists have long understood that plants can adjust their photosynthetic pigment levels to best utilize the long-term, prevailing light field. In practice, this means that — although light levels may change significantly on short time scales and in small areas — plants have adapted such that, on average, they don’t absorb more light than they can use. Given that reefs are composed of photosynthetic organisms, it seemed likely that a similar relationship would hold.

For the purposes of their investigation, Sawall and Hochberg first obtained 52 instantaneous P-E curves representing a wide range of benthic organisms (corals and algae) and communities (coral dominated, turf algae dominated, and sand with microalgae), as well as environmental conditions. Then, to calculate daily (longer-term) irradiance representing different cloud intensities and day lengths, they gathered more than 900 light availability curves collected over a three-year period by the National Weather Service instruments at the L.F. Wade International Airport in Bermuda.

“These results indicate that reef organisms, including both corals and algae, most likely optimize photosynthesis to the same degree as terrestrial plants, at the scale of a day or longer,” Sawall said.

From the standpoint of a reef scientist attempting to understand how reef ecosytems function, these results point to photosynthesis as an “ecological integrator,” meaning that photosynthetic rates respond to all of the stresses facing an organism, including temperature, light availability, carbon dioxide levels, and nutrient availability.

In subsequent research, Hochberg and Sawall are exploring the relationship between the color of an organism and its total daily photosynthesis. These two parameters are determined by an organism’s pigment levels, and terrestrial research has demonstrated that photosynthesis can be predicted by measurement of color expressed by the pigments. This means that a remote sensing system, such as Hochberg’s COral Reef Airborne Laboratory (CORAL) project, has the potential to directly estimate ecosystem primary production without the need for laborious in situ water chemistry measurements. Primary production is one of the metrics that scientists use to measure reef health and ecosystem function. Accurate estimates of primary production are particularly important in determining how reefs around the world are being impacted by global climate change.