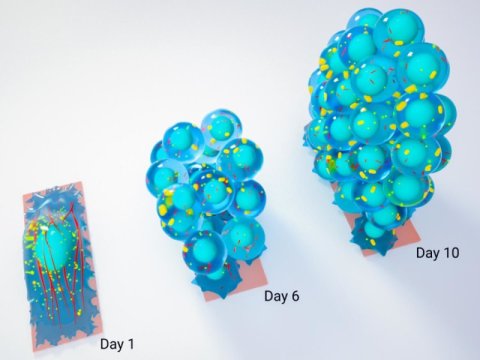 Stem cells are the blank slate on which all specialised cells in our bodies are built and they are the foundation for every organ and tissue in the body.

Recent research led by Professor G.V. Shivashankar of the Mechanobiology Institute (MBI) at the National University of Singapore (NUS) and the FIRC Institute of Molecular Oncology (IFOM) in Italy, has revealed that mature cells can be reprogrammed into re-deployable stem cells without direct genetic modification — by confining them to a defined geometric space for an extended period of time.

“Our breakthrough findings will usher in a new generation of stem cell technologies for tissue engineering and regenerative medicine that may overcome the negative effects of geonomic manipulation,” said Prof Shivashankar.

Turning back the cellular clock

It has been over a decade since scientists first showed that mature cells can be reprogrammed in the lab to become pluripotent stem cells that are capable of being developed into any cell type in the body. In those early studies, researchers genetically modified mature cells by introducing external factors that reset the genomic programmes of the cells, essentially turning back the clock and returning them to an undifferentiated or unspecialised state. The resultant lab-made cells, known as induced pluripotent stem cells (iPSCs) can then be programmed into different cell types for use in tissue repair, drug discovery and even to grow new organs for transplant. Importantly, these cells did not need to be harvested from embryos.

However, a major obstacle is the tendency for any specialised cell that is developed from iPSCs, to form tumours after being introduced into the body. To understand why this occurred, researchers turned their focus to understanding how stem cell differentiation and growth is regulated in the body, and in particular, how cells naturally revert to an immature stem cell-like state, or convert to another cell type, during development, or in tissue maintenance.

Prof Shivashankar’s team of researchers has shown that mature cells can be reprogrammed, in vitro, into pluripotent stem cells without genetically modifying the mature cells, simply by confining the cells to a defined area for growth.

When fibroblast cells (a type of mature cell found in connective tissue such as tendons and ligaments) were confined to rectangular areas, they quickly assumed the shape of the substrate (the surface or medium that the cells are attached to). Based on previous work from the Shivashankar lab, this indicated that the cells were measuring and responding to the physical properties of their environment, and conveying this information to the nucleus where DNA packaging and genome programmes would adapt accordingly.

The team grew the cells over 10 days until they formed spherical clusters of cells. Genetic analysis of the cells within these clusters revealed that specific characteristics of chromatin (the condensed form of packaged DNA) normally associated with mature fibroblasts were lost by the sixth day. By the 10th day, the cells expressed genes normally associated with embryonic stem cells and iPSCs. The researchers have now learnt that by confining the mature cells for an extended period of time, mature fibroblasts can be turned into pluripotent stem cells.

To confirm that the fibroblasts had indeed been reprogrammed into stem cells, the researchers then directed their growth, with high efficiency, into two different specialised cell types. Some cells were also directed back into fibroblasts.

The physical parameters used in the study are reflective of the transient geometric constraints that cells can be exposed to in the body. For example, during development, the establishment of geometric patterns and niches are essential in the formation of functional tissues and organs. Similarly, when tissue is damaged, either through injury or disease, cells will experience sudden alterations to their environment. In each case, mature cells may revert back to a pluripotent, stem cell-like state, before being redeployed as specialised cells for the repair or maintenance of the tissue.

“While it is well established that confining stem cells to defined geometric patterns and substrate properties can direct their differentiation into specialised cells, this study shows for the first time that mechanical cues can reset the genomic programmes of mature cells and return them to a pluripotent state,” Prof Shivashankar explained.

He added, “The use of geometric constraints to reprogramme mature cells may better reflect the process occurring naturally within the body. More importantly, our findings allow researchers to generate stem cells from mature cells with high efficiency and without genetically modifying them.”