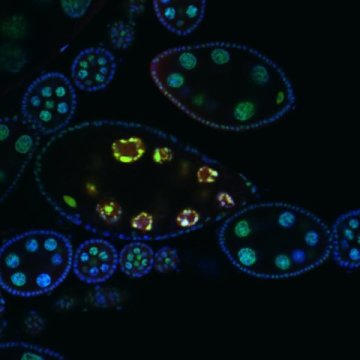 Fruit flies from different species can warn each other when parasitic wasps are near. But according to a new study led by Balint Z. Kacsoh of Geisel School of Medicine at Dartmouth, published July 19th in PLOS Genetics, they are more likely to get the message across if the fly species have previously cohabited and learned each other’s dialects.

Parasitoid wasps, which deposit their own eggs into larvae of fruit flies, are such a threat to the adult fly that just seeing a wasp will cause females flies to lay fewer eggs in an effort to protect her offspring. Previous experiments from Bosco’s group showed that females use wing movements to communicate the threat of the wasps to other females, who will then lay fewer eggs, despite never having seen a wasp. In the new study, the researchers tested whether fruit flies from different species could communicate that wasps are near. They found that when testing distantly related flies could not communicate as effectively as flies of the same species, but that communication improved when the two species cohabitated. Living together enabled the flies to learn new dialects composed of different visual and scent cues. Further genetic experiments showed that learning another dialect requires a part of the brain called the mushroom body, which is the center of learning and memory in flies.

The study reveals that fruit flies are capable of mastering the complex set of cues required for interspecies communication, and establishes them as a useful genetic model for studying the evolution of dialects. Future studies may reveal what other messages fruit fly species might be passing back and forth, besides the threat of parasitoid wasps.

Balint Z. Kacsoh adds: “We observe variation in communication ability between different fly species, even though there exists a conserved fly “language.” We suggest that variation in communication ability could to be analogous to “dialects,” as the term reflects natural variations between a common mode of communication. The dialect barrier can be alleviated through socialization between species, without which, information would otherwise be lost in translation. We plan to build upon our work by elucidating the neural circuitry that governs dialect learning.”