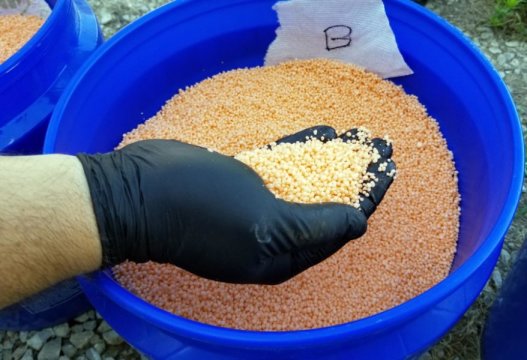 Take a trip down into the soil beneath a field of crops. You won’t find just dirt, water, and creepy-crawlies. You’ll also find reactions that remind you of high school chemistry lab.

Many researchers study the reactions of elements and compounds in the soil, especially because some, like nitrogen, are required by plants to grow. Nitrogen is often added to the soil as a fertilizer. However, not all nitrogen added is usable by plants.

The compound urea is currently the most popular nitrogen soil fertilizer. It’s a way to get plants the nitrogen they need to grow. Although the nitrogen in urea is not directly usable by plants, once urea is in the soil it undergoes a chemical reaction that produces ammonium, a nitrogen-rich compound that thus becomes available for plant nutrition. The catalyst responsible for this reaction is an enzyme called urease. This enzyme is produced by microorganisms in the soil.

There’s just one problem with urease: it works too well!

“The reactions that urea undergoes are much too fast, because of the action of urease,” says Stefano Ciurli. Ciurli is a professor of chemistry at the Department of Pharmacy and Biotechnology of the University of Bologna, Italy. “Urease accelerates the formation of nitrogen-containing compounds that quickly dissipate into the environment instead of being absorbed by plants.”

Controlling how fast the urease accelerates the process is important to help plants get as much nitrogen as possible. This is usually done by modifying the urea fertilizer to decrease urease activity. Ciurli and his team study these techniques. They looked to prove if coating the urea fertilizer granules with a specific compound — maleic-itaconic polymers (MIPs) — would help with this. Previous studies had argued that it didn’t have an effect.

What they found was that, at some levels of soil acidity, their compound was good at slowing down urease. They found that their compound compared well to another used for this purpose, N-(n-butyl)-thiophosphoric triamide (NBPT). However, this second compound has been shown to have some negative effects on crops in addition to being incorporated in plants and soil organisms.

The research results suggest farmers may have a choice, depending on their soil’s acidity.

“For farmers who already use the compound we tested, this study tells them why the chemical is effective,” Ciurli says. “Those that have been discouraged from using it because they didn’t think it worked can now explore the benefits of it compared to other chemicals available in the market.”

What prevents the plants from being able to take up the urea in the first place? What makes a nutrient unavailable to the plant?

“Plants can only absorb nutrients through their roots if the chemical is soluble in the water contained in soil,” Ciurli explains. “Plants don’t have teeth to chew on soil; they only have roots that can almost passively absorb what ‘comes by’ them.”

In the soil, there can be many forms of nitrogen. Some are gases and are easily lost into the air. Others in the soil can be “sticky” or not sticky. Those that are not sticky, such as nitrates, are easily taken up by plants but also easily washed away from the soil into rivers and lakes. Their abundance there can lead to algal blooms and dead zones.

Ciurli says one of the next steps in their research is carrying out similar studies in the soil, as this study was done in the laboratory.

The work has implications for plants as well as Ciurli’s other passion, pharmaceuticals for metal-based biological targets.

“The knowledge of how urease works, at the molecular/atomic level, is a first step to develop urease inhibitors for both agricultural application and also for medical issues,” he says. “Urease is the key virulence factor for a series of microorganisms that cause antibiotic resistance, cancer, tuberculosis, plague, and brain diseases. Knowing the chemistry of this enzyme will contribute to the battle of the human race for its survival on this planet.”