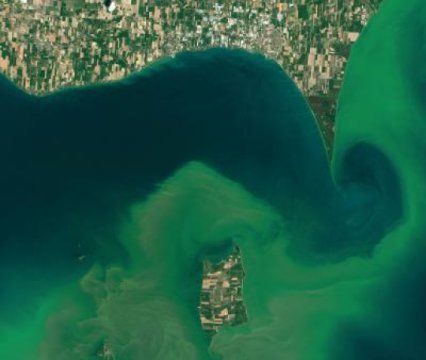 Changes in temperature and precipitation have already impacted the amount of nitrogen introduced into U.S. waterways, according to new research from a team of three Carnegie ecologists published this week in Environmental Science & Technology.

Nitrogen from agriculture and other human activities washes into waterways, which, in excess, creates a dangerous phenomenon called eutrophication. This can lead to toxin-producing algal blooms or low-oxygen dead zones called hypoxia. Over the past several summers, dead zones and algal blooms in lake and coastal regions across the United States have received extensive news coverage.

Carnegie’s Anna Michalak and her team have spent several years studying the effects of nitrogen runoff and how expected changes in precipitation patterns due to climate change could lead to greater risks to water quality.

But their efforts so far have focused on making predictions of the future. Now, with Tristan Ballard, they looked backward to analyze long-term trends in nitrogen runoff going back to the 1980s.

“We wanted to see whether we could find evidence in the historical record of changes in temperature and precipitation affecting the amount of nitrogen that gets into watersheds in the contiguous U.S.,” said lead author Ballard. “Our findings could improve our modeling of future risks and guide management efforts.”

They found that climate was a key factor in how much nitrogen ended up in the water system, with warming springtime temperatures and accompanying storms having a direct impact on nitrogen runoff.

READ  Research: Discovery could be a step toward developing treatments for cancer and autoimmune diseases --

Agriculture played a role, too, but it was more complicated than a simple one-and-one correlation.

For example, in the northern Great Plains, increased farming and climate conditions compounded to put more nitrogen in the waterways. However, in the Great Lakes, despite efforts to reduce the amount of nitrogen released by human activity, precipitation increased so much that nitrogen still overloaded the water system.

“What we have shown is that deteriorating lake and coastal water quality is not just about how we develop land and how much fertilizer we use on fields; it’s also about how human action at a global scale is changing rainfall and temperatures,” Michalak said. “It’s a complex system, but it comes down to better managing human impacts across scales, from your own backyard to the planet as a whole.”

The team says their findings mean that management strategies will become even more challenging over time. Simply decreasing the amount of nitrogen released by industry and farming will not be enough. The decreased usage will have to be enough to offset greater risk due to increased precipitation, too.