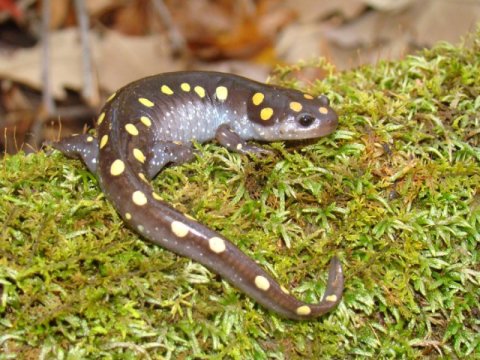 While a warming climate in recent decades may be a factor in the waning of some local populations of frogs, toads, newts and salamanders, it cannot explain the overall steep decline of amphibians, according to researchers.

After analyzing many years of data for 81 North American amphibian species including more than 500,000 observations collected at more than 5,000 sites in 86 study areas by a broad coalition of herpetologists, it is clear a warming climate is not the primary driver in their disappearance, according to lead researcher David Miller, associate professor of wildlife population ecology in Penn State’s College of Agricultural Sciences.

“The influence of climate on amphibian populations is complex,” Miller said. “In the last 30 years, we have seen increases in temperature, while some spots have gotten drier and others have gotten wetter. In the big picture, those developments seem to counteract each other. As a result, the impact of climate change for the measures we focused on cannot explain the sharp decline we have seen and continue to see across amphibian populations.”

The study showed that, on average, 3.4 percent of amphibian species are disappearing from local amphibian habitats each year. That is the equivalent of losing half the species in any wetland, stream reach or forest site every 20 years. Miller believes these declines are a continuation of losses of amphibian populations that have been occurring since the 19th century when human land-use began destroying their habitats.

“It is an alarming trend,” he said. “Across species, on average, we lose more than three in 100 of the sites where they occur each year. Whether the sites are ponds, short stretches of streams or, if we’re talking about salamanders, forest plots — they’re gone. Our research took place in the United States and Canada, but it’s a trend worldwide.”

In the study — the findings of which were published today in Nature Communications — 41 researchers estimated changes in amphibian numbers in plots they have been watching, in many cases, for a decade or more. They collected data on both public and private lands, including national parks, forests, and wildlife refuges.

Researchers correlated those changes with weather trends and climate-related conditions, directly measuring how climate drivers are affecting the processes that determine amphibian range shifts. For example, they found that less precipitation during breeding seasons generally has a negative effect on amphibian populations, while less snowfall during winter may benefit many populations.

The researchers determined that, while climate change likely has been and will be a factor in the decline of some local populations such as in the Rocky Mountain West — where the effect of a warming climate seems to be more severe for amphibians — it is not responsible for the current declines that are occurring.

That conclusion, of course, has scientists pondering the culprits most responsible for amphibian decline. Erin Muths, a scientist at the U.S. Geological Survey and a co-lead on the project, believes that the cause of declines comes down to a suite of local factors.

“It depends on the location whether habitat loss, disease, contaminants, climate, or a combination of these local factors is the culprit,” she said. “Amphibians are challenged by a range of stressors that may be unique to location but in combination are leading to wide-range declines.”

To better understand the causes of declines, Miller and colleagues from the USGS have initiated new work studying emerging pathogens that affect amphibians. A major concern for amphibian populations are new and deadly pathogens, mostly spread around the planet by humans — likely propelled by the pet trade.

According to Evan Grant, with the USGS Amphibian Research and Monitoring Initiative, there are at least two new pathogens that researchers know of that are currently affecting North American amphibians.

“One is the chytrid fungus and the other is ranaviruses,” he said. “We are trying to figure out how these affect populations of amphibians in the Northeast. We are still learning how infections are spread and why some species are more susceptible.”

This past summer, for example, Miller’s research group at Penn State watched the die-off of salamander larvae and tadpoles in the ponds they monitor in a Centre County, Pennsylvania, site called the Scotia Barrens. Preliminarily, Miller believes ranavirus caused the mortality event.

“Once these diseases make it to North America then the animals themselves can spread them around,” he said. “But it really takes people to be involved in carrying the diseases from, say, Asia to the United States.”

This research is part of the Amphibian Decline Working Group supported by the John Wesley Powell Center for Analysis and Synthesis, funded by the U.S. Geological Survey.