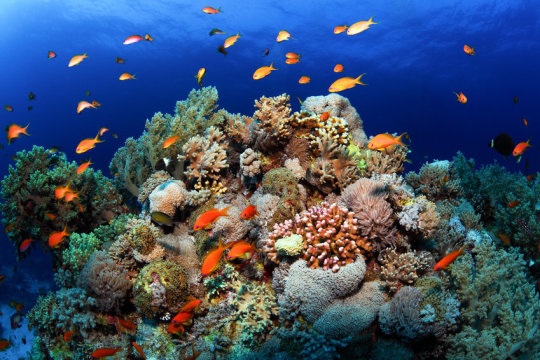 Climate change is bad news for coral reefs around the world, with high ocean temperatures causing widespread bleaching events that weaken and kill corals. However, new research from The University of Texas at Austin has found that corals with a solitary streak — preferring to live alone instead of in reef communities — could fare better than their group-dwelling relatives.

The findings, which could potentially give clues about where modern reef conservation efforts should be focused, are based on a survey of coral species that survived during a period of warming in Earth’s past that resembles the climate change of today. And while the research suggests that corals may cope better with climate change than expected, the isolated lifestyles of the survivors could mean that the coral ecosystems of the future could be bleak.

“Although corals themselves might survive, if they’re not building reefs, that’s going to cause other problems within the ecosystem,” said Anna Weiss, a Ph.D. candidate at the UT Jackson School of Geosciences who led the research. “Reefs support really big, diverse communities.”

The environment isn’t the only thing facing a bleak future. The coral species with the best odds of survival are drab in comparison to colorful reef corals.

The research was published in the journal Paleoceanography and Paleoclimatology on Jan. 21. Weiss co-authored the paper with her adviser Rowan Martindale, an assistant professor at the Jackson School.

The study examined coral species that lived about 56 million years ago during the transition of the late Paleocene to the Early Eocene, a time interval that lasted about 200,000 years and that included spikes in temperature and atmospheric carbon dioxide. The spikes created global temperatures that are about 14 degrees Fahrenheit (8 degrees Celsius) warmer than they are today and made oceans more acidic. The researchers tracked coral over this period for insight about how coral living today might respond to contemporary climate change.

They carried out the work using an international fossil database. The database includes information about when hundreds of coral species lived and their physical traits such as how a species ate, the type of environment where it lived, how it reproduced and whether it was able to form colonies. The research revealed that at the global level, solitary coral species increased in diversity during the warm period. They also found that certain traits that probably helped corals cope with the effects of climate change were associated with coral survival.

One of the traits is catching food independently rather than getting nutrients from heat-sensitive algae that live in certain coral tissues but leave, causing coral bleaching, when the water gets too warm. Another trait is preferring to live on stony seafloor bottoms where the water is cooler rather than on carbonate rock in warmer and shallower areas. Researchers said that understanding which traits are connected to coral survival in the past could be a useful lens for predicting how corals today might respond to ongoing warming and could help focus conservation efforts.

“Conservationists want to know what traits might help different species survive global change. If we can find patterns to survival, we may be able to help our reefs do better today and in the coming years,” said Martindale.

Carl Simpson, a paleobiologist and assistant professor at the University of Colorado Boulder who was not involved with the research, said it was interesting to see how different coral traits were linked to different survival outcomes.

“It can be a little bit of a subtle thing, because you would think that they’re all susceptible to environmental change and warming and acidification,” he said. “But it turns out that there’s enough variety in the way that they live that they actually respond differently.”

Finding out the corals on the global level were able to adapt to climate change in the past suggests that they may be able to do it again in the future. However, Weiss notes that perspective is a “best-case scenario.” Warming during the Paleocene happened over thousands of years, whereas the rate of warming today is occurring over decades to centuries. It’s unknown whether corals will be able to cope with the rapid pace of change that is happening in the present. Weiss said that more research that explores how specific communities of corals — rather than corals as a whole — responded to warming in the past could help improve scientists’ understanding of how corals in different environments around the world might respond to climate change today.

The research was supported by the Jackson School of Geosciences.