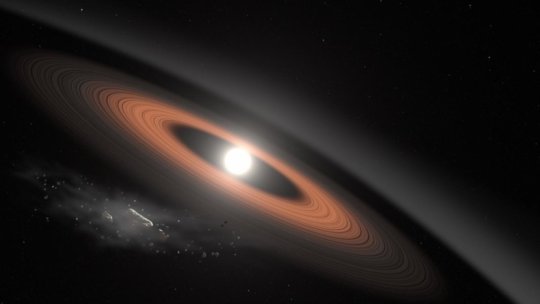 A volunteer working with the NASA-led Backyard Worlds: Planet 9 project has found the oldest and coldest known white dwarf — an Earth-sized remnant of a Sun-like star that has died — ringed by dust and debris. Astronomers suspect this could be the first known white dwarf with multiple dust rings.

The star, LSPM J0207+3331 or J0207 for short, is forcing researchers to reconsider models of planetary systems and could help us learn about the distant future of our solar system.

“This white dwarf is so old that whatever process is feeding material into its rings must operate on billion-year timescales,” said John Debes, an astronomer at the Space Telescope Science Institute in Baltimore. “Most of the models scientists have created to explain rings around white dwarfs only work well up to around 100 million years, so this star is really challenging our assumptions of how planetary systems evolve.”

A paper detailing the findings, led by Debes, was published in the Feb. 19 issue of The Astrophysical Journal Letters and is now available online.

J0207 is located around 145 light-years away in the constellation Capricornus. White dwarfs slowly cool as they age, and Debes’ team calculated J0207 is about 3 billion years old based on a temperature just over 10,500 degrees Fahrenheit (5,800 degrees Celsius). A strong infrared signal picked up by NASA’s Wide-field Infrared Survey Explorer (WISE) mission — which mapped the entire sky in infrared light — suggested the presence of dust, making J0207 the oldest and coldest white dwarf with dust yet known. Previously, dust disks and rings had only been observed surrounding white dwarfs about one-third J0207’s age.

When a Sun-like star runs out of fuel, it swells into a red giant, ejects at least half of its mass, and leaves behind a very hot white dwarf. Over the course of the star’s giant phase, planets and asteroids close to the star become engulfed and incinerated. Planets and asteroids farther away survive, but move outward as their orbits expand. That’s because when the star loses mass, its gravitational influence on surrounding objects is greatly reduced.

This scenario describes the future of our solar system. Around 5 billion years from now, Mercury, then Venus and possibly Earth will be swallowed when the Sun grows into a red giant. Over hundreds of thousands to millions of years, the inner solar system will be scrubbed clean, and the remaining planets will drift outward.

Yet some white dwarfs — between 1 and 4 percent — show infrared emission indicating they’re surrounded by dusty disks or rings. Scientists think the dust may arise from distant asteroids and comets kicked closer to the star by gravitational interactions with displaced planets. As these small bodies approach the white dwarf, the star’s strong gravity tears them apart in a process called tidal disruption. The debris forms a ring of dust that will slowly spiral down onto the surface of the star.

J0207 was found through Backyard Worlds: Planet 9, a project led by Marc Kuchner, a co-author and astrophysicist at NASA’s Goddard Space Flight Center in Greenbelt, Maryland, that asks volunteers to sort through WISE data for new discoveries.

Melina Thévenot, a co-author and citizen scientist in Germany working with the project, initially thought the infrared signal was bad data. She was searching through the ESA’s (European Space Agency’s) Gaia archives for brown dwarfs, objects too large to be planets and too small to be stars, when she noticed J0207. When she looked at the source in the WISE infrared data, it was too bright and too far away to be a brown dwarf. Thévenot passed her findings along to the Backyard Worlds: Planet 9 team. Debes and Kuchner contacted collaborator Adam Burgasser at the University of California, San Diego to obtain follow-up observations with the Keck II telescope at the W. M. Keck Observatory in Hawaii.

“That is a really motivating aspect of the search,” said Thévenot, one of more than 150,000 citizen scientists on the Backyard Worlds project. “The researchers will move their telescopes to look at worlds you have discovered. What I especially enjoy, though, is the interaction with the awesome research team. Everyone is very kind, and they are always trying to make the best out of our discoveries.”

The Keck observations helped confirm J0207’s record-setting properties. Now scientists are left to puzzle how it fits into their models.

Debes compared the population of asteroid belt analogs in white dwarf systems to the grains of sand in an hourglass. Initially, there’s a steady stream of material. The planets fling asteroids inward towards the white dwarf to be torn apart, maintaining a dusty disk. But over time, the asteroid belts become depleted, just like grains of sand in the hourglass. Eventually, all the material in the disk falls down onto the surface of the white dwarf, so older white dwarfs like J0207 should be less likely to have disks or rings.

J0207’s ring may even be multiple rings. Debes and his colleagues suggest there could be two distinct components, one thin ring just at the point where the star’s tides break up the asteroids and a wider ring closer to the white dwarf. Follow-up with future missions like NASA’s James Webb Space Telescope may help astronomers tease apart the ring’s constituent parts.

“We built Backyard Worlds: Planet 9 mostly to search for brown dwarfs and new planets in the solar system,” Kuchner said. “But working with citizen scientists always leads to surprises. They are voracious — the project just celebrated its second birthday, and they’ve already discovered more than 1,000 likely brown dwarfs. Now that we’ve rebooted the website with double the amount of WISE data, we’re looking forward to even more exciting discoveries.”