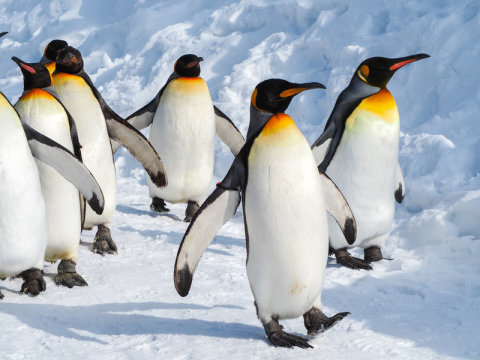 Emperor penguins at the Halley Bay colony in the Weddell Sea have failed to raise chicks for the last three years, scientists have discovered.

Until recently, the Halley Bay colony was the second largest in the world, with the number of breeding pairs varying each year between 14,000 — 25,000; around 5-9% of the global emperor penguin population.

The failure to raise chicks for three consecutive years is associated with changes in the local sea-ice conditions. Emperor penguins need stable sea-ice on which to breed, and this icy platform must last from April when the birds arrive, until December when their chicks fledge.

For the last 60 years the sea-ice conditions in the Halley Bay site have been stable and reliable. But in 2016, after a period of abnormally stormy weather, the sea-ice broke up in October, well before any emperor chicks would have fledged.

This pattern was repeated in 2017 and again in 2018 and led to the death of almost all the chicks at the site each season.

The colony at Halley Bay colony has now all but disappeared, whilst the nearby Dawson Lambton colony has markedly increased in size, indicating that many of the adult emperors have moved there, seeking better breeding grounds as environmental conditions have changed.

The re-location of many of the birds to a more stable breeding ground is encouraging, as until now it was not known whether the penguins would seek alternative sites in response to significant changes in their local environment.

Lead author and BAS remote sensing specialist Dr Peter Fretwell said: “We have been tracking the population of this, and other colonies in the region, for the last decade using very high resolution satellite imagery.

“These images have clearly shown the catastrophic breeding failure at this site over the last three years. Our specialised satellite image analysis can detect individuals and penguin huddles, so we can estimate the population based on the known density of the groups to give reliable estimate of colony size.”

BAS penguin expert and co-author Dr Phil Trathan, said: “It is impossible to say whether the changes in sea-ice conditions at Halley Bay are specifically related to climate change, but such a complete failure to breed successfully is unprecedented at this site.

“Even taking into account levels of ecological uncertainty, published models suggest that emperor penguins numbers are set to fall dramatically, losing 50-70% of their numbers before the end of this century as sea-ice conditions change as a result of climate change.”

By using satellite imagery to study the behaviour of this colony and its response to catastrophic sea-ice loss scientists will gain vital information about how this iconic species might cope with future environmental change.