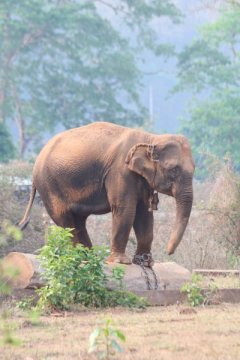 Humans have been capturing wild Asian elephants for more than 3,000 years, and this still continues today despite the fact that the populations are declining. An international team of researchers has now analysed records of timber elephants in Myanmar to understand the effects of capture. The study shows that even years after their capture, wild-caught elephants’ mortality rate remains increased, and their average life expectancy is several years shorter compared to captive-born animals.

Millions of wild animals are captured alive each year for a diverse range of purposes. While members of some species can thrive in captivity and are healthier, live longer, and produce more offspring than their free-living counterparts, many others perform far worse. Elephants, for example, are known to be at a much higher risk of dying when captive in zoos compared to living in the wild. Comparisons like these, however, mainly illustrate the differences in the diet, social environment, exercise possibilities, and disease patterns between zoos and wild environments. They provide little insight to how the capture of wild elephants might affect their long-term well-being in captivity.

Elephants have been employed in logging camps in Myanmar for centuries. Wild-caught and captive-born animals there work and live side by side in forests and are, generally, tamed with the same methods, live in the same environments, and are treated similarly. The detailed records kept by local governments on elephant husbandry provided a rich data set for researchers from the University of Turku, Finland, and the Leibniz Institute for Zoo and Wildlife Research in Berlin, Germany. Based on data stretching back nearly a century and including over 5,000 timber elephants, the researchers could establish a robust predictive model on elephant survival after capture.

“Our analysis reveals that wild-captured elephants had lower survival chances than captive-born elephants regardless of how they’d been captured, whether by stockade of whole groups, lassoing single elephants, or immobilisation by sedation. This means that all these methods had an equally negative effect on the elephant’s subsequent life. We also found that older elephants suffered the most from capture; they had increased mortality compared to elephants caught at younger ages,” says Dr Mirkka Lahdenpera, the leading author of the study.

All elephants face the highest risk of death in the year immediately following capture. Although the risk decreases in subsequent years, these negative effects still last, alarmingly, for around a decade, a surprisingly long time.

“We chose to rely on data from timber camps as, their capture aside, both wild-caught and captive-born elephants have very similar life styles. This unique situation allows a comparison between these two groups unbiased by other factors such as diet or exercise,” explains Dr Alexandre Courtiol, the data scientist of the study.

Both captive-born and wild-captured timber elephants in Myanmar live together in semi-captive populations. They work during the day and are released to forests during the night to find food on their own, and can then interact with other captive timber elephants as well as wild elephants. The captive animals are also subjected to the same governmental regulations concerning data recording, workload, and rest periods (working elephants have holidays, maternity leave, and a mandatory retirement age). Both captive-born and wild-caught elephants are tamed and trained before entering the workforce. Wild-captured elephants may, however, be exposed to harsher treatment depending on their age, sex and, personality compared to captive-born calves.

“The long-term overall cost of capture and taming resulted in a median lifespan that is 3-7 years shorter than that of captive-born elephants. Capturing elephants to sustain captive populations is, consequently, detrimental, because it not just reduces wild populations of this endangered species, but it also cannot provide a viable solution to sustain captive populations. These wild-caught animals live shorter lives and reproduce poorly in captivity,” says the senior investigator of the study, Academy Professor Virpi Lummaa.

Long-term stress due to capture and taming as well as changes in the social environment are potential reasons for the shorter life of wild-captured elephants.

“We ought to find alternative and better methods to boost captive populations of elephants. Even today, over 60 percent of elephants in zoos are captured from the wild and about a third of all remaining Asian elephants now live in captivity,” says Lahdenpera.

The results of the study strongly suggest that more studies are necessary to understand and assess how widespread these negative effects of capture are in other species. Whenever capture is unavoidable, animal welfare specialists, veterinarians, and ecologists must work together to improve conservation and management practices. Support and care for the animals is especially critical during the period immediately after capture.

The study was funded by the European Research Council, Academy of Finland and Kone Foundation.

The research article Differences in age-specific mortality between wild-caught and captive-born Asian elephants by Mirkka Lahdenpera, Khyne U Mar, Alexandre Courtiol and Virpi Lummaa was published in Nature Communications.

All authors contributed equally to this study.