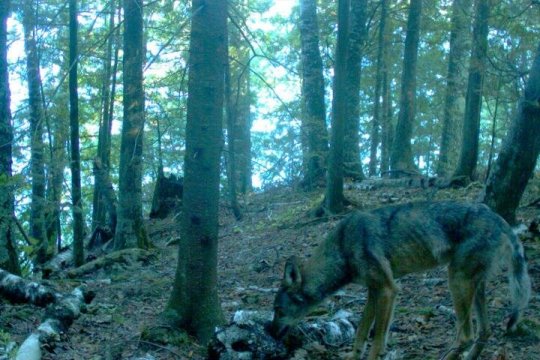 Researchers placed 160 cameras on 19 of the 22 Apostle Islands in northern Wisconsin to see which carnivores were living there. After taking more than 200,000 photos over a period of three years, the team discovered that several mammalian predators are living on various islands in this remote archipelago in Lake Superior.

Reported in the journal Community Ecology, the study reveals a thriving community of carnivores, with some doing better than others on islands that differ in size and proximity to the mainland.

The researchers put motion-activated cameras on each of the islands studied, at a density of one camera per square kilometer. Over time, the camera traps recorded 10 of 12 Wisconsin land carnivores, including American martens, black bears, bobcats, coyotes, fishers, gray foxes, gray wolves, raccoons, red foxes and weasels. The cameras also captured images of semiaquatic carnivores mink and river otters, as well as raptors, small rodents, squirrels, songbirds and waterfowl.

“This is one of the first studies to focus on the carnivore community in an island system,” said Illinois Natural History Survey wildlife ecologist Max Allen, who led the new research with Morgan Farmer and Tim Van Deelen at the University of Wisconsin, and Erik Olson from Northland College. “The area is remote and difficult to access, with rough water in summer and variable ice conditions in winter, so the carnivore community had never been studied.”

The INHS is a division of the Prairie Research Institute at the University of Illinois at Urbana-Champaign.

The research offers new insights into a phenomenon known as island biogeography, which describes the distribution and diversity of species in territories with distinct boundaries that can act as obstacles to inward and outward migration.

“Most research on island biogeography has been conducted in tropical marine systems that have innately high levels of biodiversity and few carnivores,” Allen said. The new study is unique in that it examines carnivores in a remote island system in a temperate locale, he said.

“We were surprised to find an intact carnivore community — including gray wolves and American martens — on these islands,” Allen said. “We found more carnivore species on islands that were larger and/or closer to the mainland.”

Black bears were found on 13 of the islands examined. They appeared to prefer bigger islands that were closer to other islands. Gray wolves, however, were seen only on one of the 19 islands studied. These differences may have to do with the animals’ diets and habits. Bears tend to be solitary and eat a variety of foods, while wolves are social, with more specialized diets. The latter tend to prey on ungulates like deer.

The researchers were surprised to find that some smaller carnivores, such as weasels and American martens, appeared to prefer life on islands further from the mainland.

The carnivores may swim from island to island or use ice bridges that form in winter between the islands. Documented declines in the duration of lake ice as a result of climate change may hinder the movement of carnivores between islands and to and from the mainland, Allen said.

“The study offers a first glimpse of the top predators making a living on the Apostle Islands,” Allen said. “It’s pretty exciting to be the first to document species in an area, especially a wild and remote piece of land in the National Park Service.”